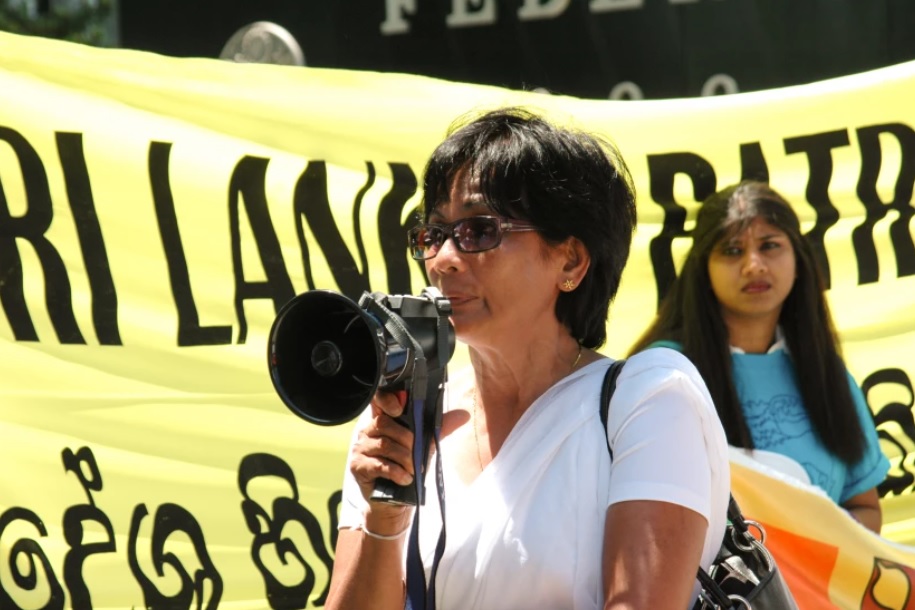 Hassina Leelarathna, a co-founder of the only Sri Lankan newspaper in the U.S. and an activist who spurred fellow immigrants to help when disasters struck their homeland, has died at age 73.

After moving to California from her native Sri Lanka, Leelarathna founded the Sri Lankan Express in 1981 with her husband, Deeptha Leelarathna.

For her, it was an “intense” labor of love. Leelarathna worked full time at other jobs, most recently as a financial analyst for the Department of Veterans Affairs.

The couple also broadcast a radio program, “Tharanga,” in English and Sinhalese for a Sri Lankan community that in Los Angeles County numbers nearly 20,000 and supports about 10 Buddhist temples.

After her husband died in 2006, Leelarathna ran the newspaper on her own, spotlighting the decades-long civil war in Sri Lanka as well as issues faced by new immigrants in this country, including healthcare, education and the economy.

The Express also highlighted the accomplishments of immigrants and their children.

“If a Sri Lankan won the spelling bee, he or she would be covered,” Gamage, 38, said. “We’re small in size. We need to celebrate each other.”

Leelarathna played a dual role as a documenter of events and a participant.

She was a ubiquitous presence at rallies and protests, both interviewing people for the newspaper and at times, taking the megaphone to pump up the crowds.

She did not hesitate to tell people what she thought they should do, whether it was raising money for tsunami victims or showing greater respect to Buddhist monks.

“She did not stay quiet, ever, when she could be doing something better like bringing attention to crisis or inhumanity,” said Podinilame Dissanayake, a longtime friend from Duarte who used to deliver the paste-up paper from the couple’s home in Pacoima to the printer in Gardena. “Her character was marked by two distinct traits: her passion for journalism and the uncompromising patriotism toward the country of her birth.”

After a tsunami hit Sri Lanka and nearby nations in December 2004, the pair reported extensively on efforts to assist victims.

On a visit to his homeland, an island nation off the southern coast of India, Deeptha Leelarathna discovered international aid stuck at ports or being siphoned off by corrupt officials.

The Sri Lankan Express was among the first media outlets covering tsunami-related corruption and inefficiency at government agencies and international aid groups.

Urging fellow Sri Lankan immigrants to raise money for disaster victims or to take up social service causes, Hassina Lalarathna demanded: “Why do you keep silent? Let us get together and make it happen,” recalled the Ven. Punyasiri Aparekke, a leader of the Maithree Vihara Buddhist Meditation Center in Sun Valley.

“I would say more than 95% of the Sri Lankan older generation knows her and her contributions,” Aparekke said. “She was a woman with a strong backbone. She was so dedicated, so concerned even about the minute things of life.”

At the Times of Ceylon, she met another reporter, Deeptha Leelarathna, whose pieces on politics and science won him two fellowships, including one at Stanford.

In 1975, the couple left their native country to move to the U.S., first settling in the Bay Area, then in Southern California.

She earned a master’s degree in English from San Jose State and loved Shakespeare and mysteries, reading every John Grisham novel.

She was a “persistent sleuth” who pushed sources to explain themselves and was also a committed fact-checker, Gamage said.

“She was really good at asking the right questions,” he said. “Why are we spending X amount on this? Why are there two purchases when you only need one?”

Leelarathna wrote “all the time” and in the last few years had been working on a book documenting the history of the Sinhalese people in the U.S.

The book is more than half-done, according to Dissanayake, and friends hope to dig into her computer files to see if there is a way to complete it.

Gamage, a systems analyst who describes himself as “a terrible writer,” has no plans to take over the newspaper.

With no successor, its future is in jeopardy.

“When my friends and I cleaned the garage and looked at my mother’s belongings and the old issues, they were amazed at everything the newspaper did. The depth of the coverage — suicide bombings, attacks, assassinations, aid — and the images and headlines were fascinating. It talked about real life, it was raw,” Gamage said. “We need to save it, but how?” (Courtesy LA Times)