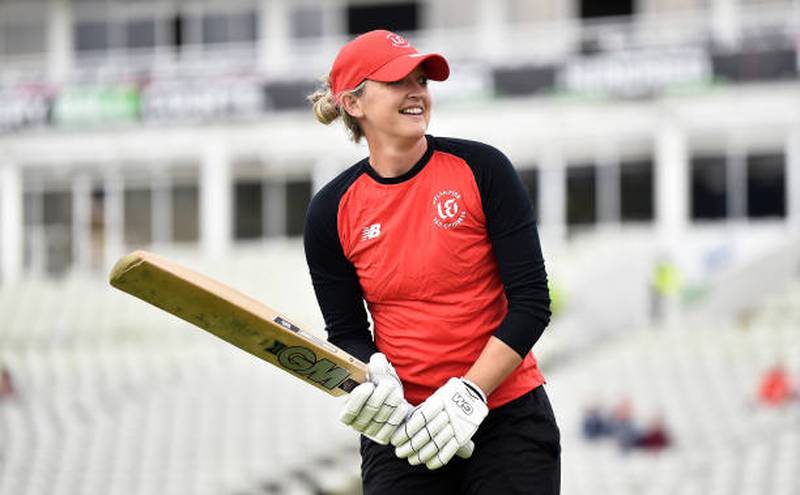 She has been named Team Abu Dhabi assistant coach for the upcoming Abu Dhabi T10 competition.

The appointment means that Taylor will become the first female coach in men’s professional franchise cricket when the tournament gets underway on 19 November.

Widely regarded as one of the best wicket-keepers in the history of the game, Taylor became the first female specialist coach at a men’s county side with Sussex in the United Kingdom.

She now builds on that by again treading new ground with Team Abu Dhabi, and Taylor hopes that her involvement with the Abu Dhabi T10 will inspire women and girls all over the world.

“Coming into this franchise world, you get players and coaches coming in from all around the world where it may not necessarily be the norm but I’d love to think that some young girl or some woman watching can see me in the coaching team and realise that’s an opportunity and they can push for it, saying ‘If she can do it, why can’t I?’,” said Taylor.

“I do hope that it becomes a little more normal and I may be the first but I won’t be the last. Coaching is my passion and it’s kind of going down the men’s routem, which is really exciting.

“I’ve never had issues in male environments and I enjoy the challenge. You always want to prove that you’re good enough, but that’s the same for any coach going into a new environment.”

Klusener is currently head coach of the Afghanistan team playing at the ICC Men’s T20 World Cup and his presence adds yet more world-class experience to the coaching team.

As well as continuing to work with Sussex, Taylor also coaches at Bede’s School in the same county and this summer came out of retirement to feature in The Hundred and the 2021 Women’s Twenty20 Cup in the U.K..

While she remains open to more playing opportunities, Taylor turned down a playing gig this winter in order to work with Team Abu Dhabi and she is looking forward to being able to pick the brains of the likes of Farbrace and Klusener.

“It came completely out of the blue and it was an amazing surprise,” she said of reading a WhatsApp from Team Abu Dhabi general manager Shane Anderson asking if she’d be interested in the post. “I’ve been counting down the days until I can get to Abu Dhabi and get going.

“I cannot wait. As soon as I found out who the staff was, that made it even more exciting and it was a lightbulb moment that I would be stupid to miss out on the opportunity. I’ve got so much to learn, they’ve probably got so much to tell me and I’m very much going to be a sponge. I’ll have to be.

“I’m going to sit there with a notebook and write as much as I can down. They know that as well, and will teach me so much as I’m at the start of my coaching career.”

Anderson added: “Sarah brings a wealth of international experience and knowledge to the group and her appointment supports our desire to create a team culture of growth and inclusion, which ultimately sets a strong platform for success.”

Abu Dhabi Cricket (ADC) is the largest world-class, multi-sports facility in the United Arab Emirates catering to everyone from elite and professional sports stars to those looking to participate in recreational sports and activities and is supported by Abu Dhabi Sports Council operating under the patronage of His Excellency Sheikh Nahyan Bin Mubarak Al Nahyan.

Located in the heart of Khalifa City A, ADC is the venue of choice for hosting all Abu Dhabi’s international cricket matches – having seen everything from the likes of matches between India, Pakistan, Australia, South Africa, New Zealand, Sri Lanka, and the West Indies to also hosting the 2014, 2020 and now the 2021 VIVO Indian Premier League (IPL) and the 2018 Asia Cup.

ADC’s current international flagship event is the bold new Abu Dhabi T10 – bringing together over 120 of the biggest names in world cricket to compete in the game’s shortest format. The 2019 edition drew over 124,000 fans to ADC across the 10-day event.

Though cricket is at the core of operations, ADC also prides itself on the world class facilities available to sportsmen and women of all ages and abilities – from elite international athletes to over 12,000 community athletes who use the facility and services on a weekly basis.