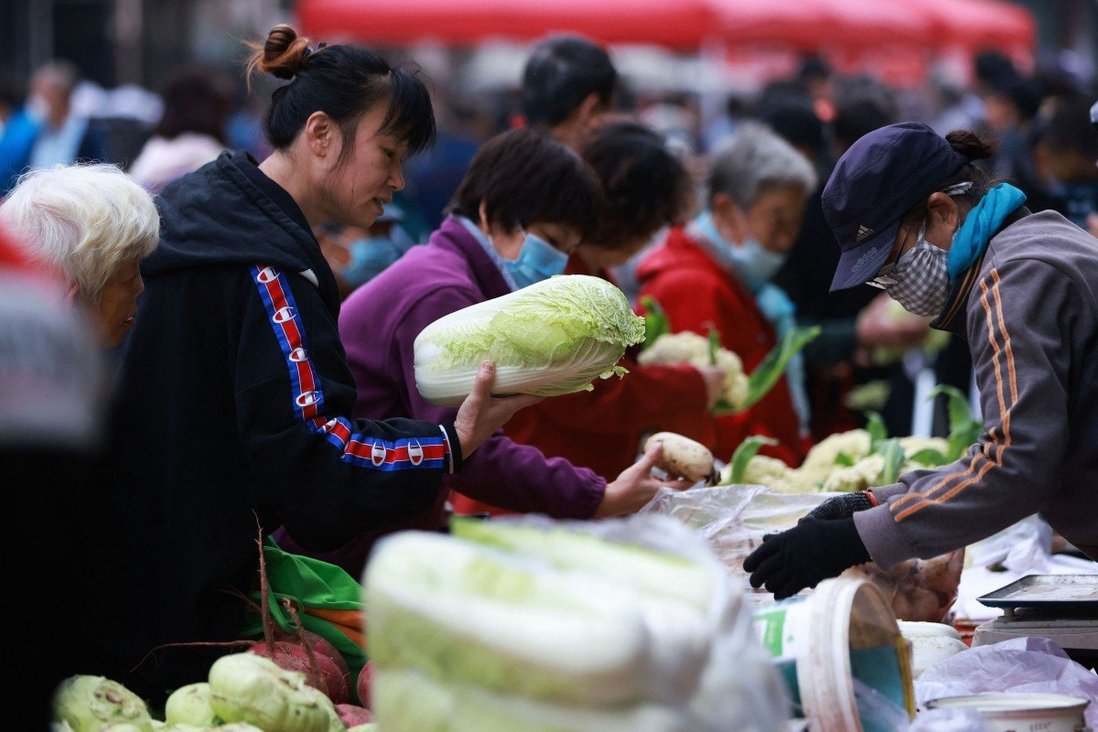 Vegetable prices have soared in China in recent weeks, costing more than meat in some cases, and creating another headache for consumers already hit by power shortages and strict coronavirus curbs.

Wholesale vegetable prices surged 28 per cent in the four weeks through until October 22, and is now at the highest level since February, data from the Ministry of Commerce shows.

Cauliflower and broccoli costs about 50 per cent more, while spinach surged 157 per cent in the four-week period. At Beijing’s Xinfadi market, a half-kilogram bag of lettuce or water spinach cost as much as 8 yuan (US$1.25) on Wednesday. The same quantity of pork cost about 8 yuan to 10.5 yuan, and chicken was 7 yuan to 10 yuan.

The rally is so strong that China’s agriculture ministry last week pledged to crack down on vegetable hoarding and to ensure stable supply.

“Due to multiple factors, such as cooler weather and rainfall, the prices of some edible agricultural products, especially vegetables, and some means of production, have continued to rise recently,” said commerce ministry spokeswoman Shu Yuting on Thursday.

She said that the ministry was tracking the daily changes in the vegetable, meat, grain and oil markets to strengthen early warnings, and would “release government reserves in a timely manner” to ensure stable supply and prices.

Many consumers also complained on social media, saying they were shocked by the prices and could not afford to eat vegetables any more.

Economists expect the boost to inflation to be temporary though, with prices likely to remain high for a few months until demand eases during the Lunar New Year in February.

GF Securities estimate a 0.5 percentage-point boost to consumer prices in October from the previous month, while JPMorgan Chase & Co. expects the same increase in the year-on-year rate.

“We expect [the consumer price index] to move up towards 2 per cent in the next few months, mainly due to base effects but also modest sequential pickup in inflation momentum,” said Zhu Haibin, chief China economist at JPMorgan in Hong Kong.

Consumer-price growth slowed to 0.7 per cent in October, with JPMorgan predicting 0.9 per cent for the full year, well below the government’s official target of 3 per cent. Economists surveyed by Bloomberg project a 1.1 per cent rise in 2021 and 2.2 per cent in 2022.

The Securities Times, a newspaper managed by the official People’s Daily, said the vegetable price surge will have a limited impact on consumer inflation. The weighting of vegetables in China’s consumer price index (CPI) is low, it said in a report citing retailers and analysts from China Minsheng Banking Corporation. (Courtesy South China Morning Post)