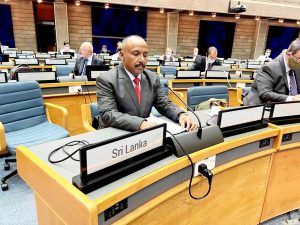 Sri Lanka has tabled a draft Resolution on Sustainable Nitrogen Management at the 8th Annual Sub-Committee meeting of the Committee of Permanent Representatives (CPRs) to the United Nations Environment Program (UNEP) held in Nairobi.

The proposed Resolution by Sri Lanka was considered as a follow-up to the Resolution adopted at UNEA-4 which provided a general framework to act on the nitrogen cycle. Sri Lanka’s Permanent Representative to the UNEP and High Commissioner to Kenya Velupillai Kananathan announced at the 8th Annual Sub-Committee Meeting of CPRs that Sri Lanka had tabled the draft Resolution and explained the object and purpose of same.

High Commissioner Kananathan added that the proposed Resolution prepared the way for the second phase of action on the Resolution adopted at UNEA-4 and contained a new value-addition on Sustainable Nitrogen Management, proposing comprehensive action at the UNEA- 5.

High Commissioner Kananathan highlighted that the draft Resolution focused on halving nitrogen waste by 2030 by covering all the spheres of the Nitrogen cycle, supported through the establishment of an Inter-convention Nitrogen Coordination Mechanism (INCOM) to address Sustainable Nitrogen Management (SNM). The High Commissioner of Sri Lanka valued the Colombo Declaration adopted in 2019, which provided the required guidance to develop new elements in the proposed Resolution. It may be recalled that spearheaded by the Ministry of Environment of Sri Lanka, the United Nations member states endorsed a proposed roadmap for action on nitrogen challenges what was called the Colombo Declaration on Sustainable Nitrogen Management.

The Ministry of Environment as the national focal point for UNEP in Sri Lanka has been campaigning to reach the lofty goal of halving the nitrogen waste by 2030, with the support of UNEP and member countries, and authored the draft Resolution for consideration of the UNEA-5 and approval at UNEA-6.  (Colombo Gazette)