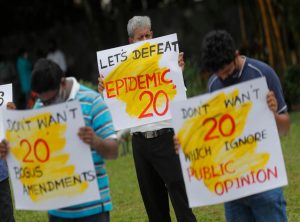 Western Diplomats are always of the opinion that Sri Lanka is a democratic country. However, the ground reality is far different.

In Sri Lanka, leaders changed the Constitution from time to time to suite their own interests. Sri Lanka secured Independence from Britain on 4th of February 1948. After Independence the politicians who came to power, introduced new Constitutions or amendments in the Constitution in the past 73 years history for their own benefit. Two constitutions were passed by the Sri Lankan Parliament and 20 amendments have been made by the leaders to meet their own agendas so far, with the support of the majority Sinhala community. Among Sri Lanka’s total population the Sinhalese community consists of 74%, with the remaining 26% being Tamils and Muslims.

The National parties, United National Party and Sri Lanka Freedom Party have ruled the country till today and the public also elect one of these parties at every election. Moist often the public face economical burdens or non-democratic activities yet they give their fullest support to these two parties and elect a government with a near 2/3rd majority. The people’s representatives, ruled the country as dictatorship, after they come to power and used the armed forces at imes to control the democratic way of demonstrations or protests and discriminate the minorities, with the 2/3rd majority under the name of democracy.

The first Constitution of Sri Lanka was drafted by Lord Soulboury, the last Governor General of Ceylon (Sri Lanka) in 1948. In 1972 when the name of Ceylon converted as Sri Lanka and declared Sri Lanka as a Republic by then, Prime Minister Srimavo Bandaranayake, the first woman Prime Minister in the world.  Through the Republican constitution removed   the 29th amendment in the Solboury constitution, with the two third majority in Parliament; the amendment which was protected the minority rights through the constitution; she gave prominent place to the Sinhala language and Buddhism through the constitution. The 1972 constitution was passed in  Nvarngahala hall; the reason of Solboury constitution said the Parliament cannot withdrew the 29th amendment; so, this reason all the Parliamentarians gathered in Navarangahala hall and passed the Republic constitution.

The 6th clause of the 1972 Constitution is as follows.

“The Republic of Sri Lanka shall give foremost place to Buddhism and accordingly it shall be the duty of the State to protect and foster Buddhism while assuring to all religions the rights granted by section 18 (1) (d).

Chapter 111 says The Official Language of Sri Lanka shall be Sinhala.”

Then in 1977, J.R,Jayawardane came to power with 5/6 majority. The reason of the people waited in queue for half pound bread during the 1970-77 Srimavao Bandaranayke’s rule. JR removed the Westminster model and introduced executive presidency in Sri Lanka 1978. Still the 1978 constitution is being followed by all the rulers who comes to power. The 1978 Constitution was crafted by J R Jayewardene. It introduced the Executive Presidency system in Sri Lanka, making it one of the most powerful of similar systems in the world. Jayawardene said famously that “the only thing that a President cannot do under this constitution is to turn a man into a woman and vice versa”.

Powers given to the President in 1978 constitution as fellows. President shall appoint all the public officers required by the constitution or any other written law to be appointed by the President, as well as the Attorney- General and the heads of the Army, Navy, Air force and Police. There shall be a President of the Republic of Sri Lanka, who is the Head of the State, the Head of the Executive and of the Government, and the Commander-in-Chief of the Armed Forces.

The opposition had a strong protest against the constitution but they were unable to do anything with the 5/6 majority. JR was elected as the Prime Minster in 1977 with the 5/6 majority; he introduced the executive presidency and sworn oath as the first Executive President.

“The Republic of Sri Lanka shall give to Buddhism foremost place and accordingly it shall be the duty of the state to protect and foster Buddha sasana.”

These are the important highlights of the 1978 constitution.

Besides that, most of the provisions brought by the 19th Amendment swept away in the current amendment which was passed. The provision of full immunity to the president will be restored.

During the 2019 Presidential election campaign Gotta waves passed over the south. Sinhala Buddhist extremist’s and the Buddhist clergy brought him to power with a strong 62% of Sinhala votes.

After the 20th amendment was passed those who brought the President to power, sought the support of the minorities to remove the government.

A new powerful Constitution is now compulsory to protect democracy and the minorities in Sri Lanka.