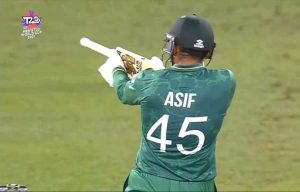 The Ambassador of Afghanistan to Sri Lanka, Ashraf Haidari, slammed what he termed was an act of aggression by a Pakistani player during the T20 World Cup match between Afghanistan and Pakistan.

Pakistani player Asif Ali was seen directing his bat like a gun towards the Afghan players during the match.

“A disgraceful act of aggression from Pakistan’s prominent cricket player @AasifAli2018, pointing his bat like a gun towards Afghan players, who gave him and his teammates a tough time. Above all, sports is about healthy competition, friendship and peace. Time for war will come!,” Haidari tweeted.