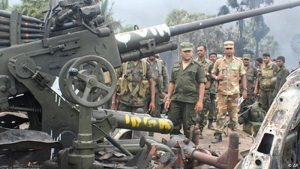 Nearly 400 senior military officers from more than 90 countries, including Sri Lanka, will convene over a period of three weeks for a high-level workshop on the laws of war, also known as international humanitarian law (IHL), and their application in military operations.

Participants will also use a new video game simulation created by the ICRC that puts officers and soldiers in scenarios that resemble real life where military objectives need to be balanced against the risk of civilian harm.

The ICRC delegation in Sri Lanka will host six senior military officers representing the Tri forces who will participate virtually at the workshop for the Asia Pacific Region which will be held from 01st to 04th November 2021.

“COVID forced us to change the format this year. We were not able to gather everyone in a single place, so we created a hybrid event with discussions broadcast from our headquarters in Geneva with in-person sessions spread across over 90 countries,” said Stephen Kilpatrick, Military and Armed Groups Adviser at the ICRC. “Despite the changes, it has allowed to reach a wider audience and we are encouraged that this year will be our largest SWIRMO yet.”

In previous years, SWIRMO was organised jointly by the ICRC and the armed forces of a specific country. The first workshop took place in Switzerland in 2007 and other hosts have included France, South Africa, Malaysia, Colombia, China, Algeria, the UAE and, most recently, in Russia. (Colombo Gazette)