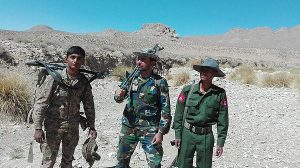 The first week of September, 2021 saw a surprise development in defence relations
between Islamabad and Naypyidaw, as a high-level delegation from Pakistan’s
Defense Ministry made a visit to Myanmar, unannounced by either side.

The visit preceded a 20-day training of some Myanmar police officers, scheduled in Karachi from September 10.

While the unexpected scheduling of the visit did raise a few eyebrows in the region, there is a rising concern that the defense relations between the two countries have been initiated not on their own accord, but at the behest of China. It is believed that in the backdrop of Pakistan-China alliance, Islamabad is expecting deeper cooperation with Beijing in
terms of sub-warfare equipment development, letting Pakistan do maintenance and overhaul for Chinese origin equipment, and more importantly, let Pakistani’s Defense industries become an avenue for Chinese defense sales.

The defence ties between Pakistan and China has broader implications in context of the aforementioned Myanmar visit.

The relations between Pakistan and Myanmar have been lukewarm for around half a decade over the issue of violence against Rohingyas in Myanmar, more so due to allegations that Pakistan is arming and training some of the ethnic community members.

Furthermore, Chinese ingress into the region has been facilitated by the purchases made by countries like Bangladesh and Myanmar of JF-17 multi-role combat aircrafts, and spurred further as Myanmar seeks to build ‘advanced generations’ of these aircrafts under license.

Driven by the need to indigenize their arms industry, China has made aggressive strides in technological advancements; sources indicate that Beijing has even achieved hypersonic missile systems, a technology that even the USA has not been able to master yet.

Along with developing domestic military stock, China has also expanded their market for military and allied sectors’ sales in the past decade. Most of the countries that import from China are in South Asia, West Asia and Africa, of which Pakistan claims the largest slice of the pie.

A comparison of Chinese exports between 2019 and 2020 however paints an interesting picture. According to SIPRI reports, while China has kept its position as the fifth largest exporter of arms in the past year, the total share of exports seems to have declined from 5.5 percent to 5.2 percent.

Reports suggest that this is due to a decline in demand of Chinese military wares, given the complaints of poor quality of Chinese hardware that have started surfacing. For instance, in March 2021, Bangladesh had raised concerns regarding their import of seven K-8W aircrafts, two of which were found to have issues in the initial runs itself.

However, there are allegations which is slowly gaining traction is that rather than a decline in Chinese exports, it is possible that Chinese exports are currently being rerouted or underreported. In 2020, for instance, Indian security apparatus detained a dual use technology, an autoclave, mislabeled as an ‘industrial dryer’ from a Chinese ship bound to Pakistan’s Port Qasim. Such a ‘mis-labeling’ may not be unique to one particular ship; given the rising scrutiny due to the Chinese leadership’s aggressive political stance in international politics, there is a possibility that some of the Chinese exports might be hidden.

Pakistani delegates visit to Myanmar and the bolstering relations, in this context, may imply Chinese intent to establish alternative routes to sell their ordnances, according to well informed sources.

For China, using Pakistan as a gateway not only enables it to export its military products without needing to reflect it in its ledgers, but also helps its access markets that may be averse to China itself.

In Myanmar, for instance, Beijing has kept dialogue with junta alive while claiming to not have ‘assisted’ their takeover, which has led to negative perception of China in public domain. Yet, making Pakistan being a middleman means that China will be able to support the Myanmar military junta without directly implicating itself.

This way will be particularly useful in the post pandemic scenario wherein multiple countries are seeing a surge of anti-China sentiment across countries. The size of Chinese military exports portfolio, therefore, is possibly not slowing down, but the waters are getting murkier just as how much the country is responsible for the arms proliferation on a global scale. (Courtesy The Economic Times)