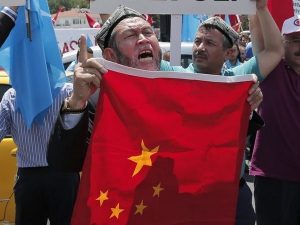 More than 40 countries have criticised China at the United Nations over the ongoing atrocities against Uyghur Muslims and other religious minorities in the country’s Xinjiang province. These nations have called on Beijing to “ensure full respect for the rule of law” in the region.

As many as 43 western countries have expressed concerns at “credible-based reports” of the existence of “re-education camps” in Xinjiang, according to AFP.

A joint statement by these countries was read by France’s UN Ambassador Nicolas De Riviere at a meeting of the General Assembly’s Human Rights Committee. “We call on China to allow immediate, meaningful and unfettered access to Xinjiang for independent observers, including the UN High Commissioner for Human Rights and her office,” they said.

This was the third time in the last three years that the United States and mainly European countries used the Human Rights Committee meeting to chide China over its policies on the Uyghurs. (Times Now News)