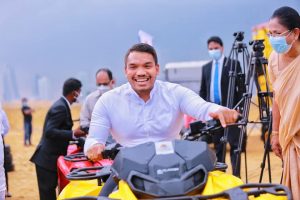 Sports Minister Namal Rajapaksa says the Colombo Port City has not been constructed for him to race.

The Minister noted that when the Port City was being constructed there were allegations being raised that the main intention was for him to have a racing track.

However, he said that the real potential of the Port City is now being understood.

“We need to look at the Port City in a positive way,” he said.

Rajapaksa also said that Sri Lanka has set a target of raising USD 1 billion through sports over the next five years.

Speaking at the launch of Sri Lanka’s first sand dunes ATV adventure centre at the Colombo Port City, Rajapaksa said that Sri Lanka has not closely looked to the sports economy.

He said that the current Government is now looking at raining money through sports events.

He said that the sand dunes ATV adventure center and the golf course at the Port City will help attract tourists.

Additionally, he said that Sri Lanka hopes to host major sporting events in the country and has already sought the rights for the 2022 Asia Cup.

The Minister said that Sri Lanka will also host an international football league next month.