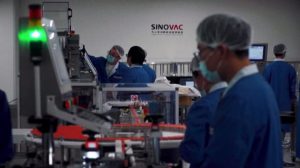 China has become the largest Covid-19 vaccine producer in the world, and it has supplied the vaccine to poor countries as a part of Vaccine Diplomacy.

However, the recipient countries have suspended the use of the Chinese vaccine due to steady growth in the new cases of Covid-19.

The Chinese vaccines –mainly Sinopharm and Sinovac– are proving not-so-effective in taming the coronavirus.

Brazil, Bahrain, Thailand, Singapore, Indonesia, UAE, Turkey, South Korea are among the countries that have stopped using Chinese vaccines or mixing them with other vaccines developed by western countries. China had become the biggest supplier of vaccine producers in the mid-2021.

It however now is seeing a significant decline as its vaccines are failing to produce intended results, thus forcing many countries to look for the alternative vaccine from western countries.

In June this year, China had claimed that the Sinovac vaccine had registered 95 percent efficiency in Brazil, calling it a “milestone” for the Covid-19 treatment programme.

However, Brazil now has suspended 12 million shots of China’s Sinovac vaccine. Expressing concerns over the authorization of the vaccines, Brazil’s health regulator Anvisa said the ban was “a precautionary measure to avoid exposing the population to possible imminent risk.”

Research by Brazil’s Goncalo Moniz Institute and the Federal University of Bahia pointed out that hospitals were struggling to cope with patient numbers when Sinovac was the main vaccine.

It said the Chinese vaccines were far less effective in reducing deaths in senior citizens.

Moreover, there have been complaints of infections by those who have already been given two jabs of the Chinese vaccine. Thus, Brazilian authorities have started administering the third jab even though many are still to be given the required second one.

Many countries such as Bahrain, the UAE, Singapore, Seychelles, Turkey have started giving the third dose of Pfizer or other western countries- manufactured vaccines to the patients, who have already been administered with Chinese vaccines but are still vulnerable to Covid-19. Even Turkish President Recep Tayyip Erdogan had to take a third dose.

The European Union (EU) is apprehensive about the Chinese vaccine. Only eight EU nations have allowed international travellers administered with Sinovac jabs. A study conducted in the European nation of Hungary showed Sinopharm offers poor protection from Covid-19. Similar observations were made by a top medical officer in China in April this year.

Expressing concerns over the low effectiveness of Chines vaccines, Gao Fu, Director of the Chinese Center for Disease Control and Prevention, had said “We will solve the issue that current vaccines don’t have very high protection rates.”

Now, the Chinese vaccines are being replaced by Germany’s BioNTech, the US’ Moderna, and the UK’s AstraZeneca owing to the former’s failure to protect against the Delta
variant.

“After censoring early vaccine recipients of Sinopharm vaccine, compared to Pfizer/BioNTech recipients, individuals vaccinated with Sinopharm had a higher risk of post-vaccination infections, hospitalizations, ICU admissions and deaths,” shows the research jointly carried out by Bahrain’s health authority and the Columbia University.

China’s neighbours like Malaysia, Indonesia, Thailand too have redflagged Sinovac and Sinopharm vaccines. Thailand has announced that the Chinese vaccines have become weak and thus it has now sought vaccines from the western countries. Indonesia has recorded the deaths of 20 doctors after they took the Chinese vaccines. Hundreds of thousands of healthcare workers in Indonesia, who completed their vaccination course using the Chinese vaccines, were later found to be testing positive for Covid-19. Malaysia has already stopped Sinovac jabs after they showed limited efficacy against new coronavirus variants.The South Asian countries that earlier relied heavily on China are now struggling to protect their citizens through proper vaccinations. This has caused public confidence in the Chinese vaccines to erode fast, sending these countries to approach the US and UK for effective vaccines.

Malaysia has announced that it would replace Chinese vaccines with those from the west following concerns over the ineffectiveness of the former ones. Even, China’s staunch supporter Cambodia too is switching to the west-developed vaccines.

“The current reality does present a stark contrast to the fanfare with which Beijing rolled out their vaccines and then insisted on their high efficacy, even when data was less available,” said Chong Ja Ian, political expert from the National University of Singapore.
In Singapore, many people had taken Sinovac initially.

They found their immunity had remained weak even after the Chinese jabs, forcing them to think of an alternative. “They took the Sinovac shots, did the blood test and saw low antibody levels, then opted for Pfizer as the third dose,” said Dr Leong Hoe Nam of Singapore’s Rophi clinic.