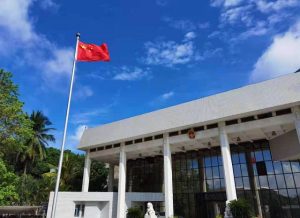 China has blacklisted the People’s Bank over a major dispute with Sri Lanka and has also advised Chinese companies not to do business with the bank.

The ban follows a dispute over contaminated fertilizer which Sri Lanka refused to accept from a Chinese company.

The Sri Lankan Government has refused to pay for the fertilizer until a fresh stock is shipped to the country.

The Economic and Commercial Office of the Embassy of the People’s Republic of China in Sri Lanka said it has backlisted the People’s Bank of Sri Lanka for defaulting on payments according to the Letter of Credit (L/C) and the contacts between two parties.

The decision has also been submitted to the Ministry of Commerce of China.

Meanwhile, People’s Bank said that it has come to know that the Economic and Commercial Counselor of Embassy of People’s Republic of China in Sri Lanka has blacklisted the People’s Bank for not effecting the payments for in lieu of a Letter of Credit issued by the bank.

People’s Bank said it has already communicated to the relevant authorities at the Chinese Embassy that the bank is bound by an enjoining order issued by the Western Province Commercial High Courts of Sri Lanka with regard to the trade transaction in question, which precludes the bank from processing of the payment.

The bank said the temporary delay in processing the said payment pertaining to the LC is solely due to the bank’s obligation to be bound by the legal directions of the country as a responsible corporate citizen.

People’s Bank said that once the legal barriers in effect are removed, the LC payment will be effected promptly as per the usual trade practices. (Colombo Gazette)