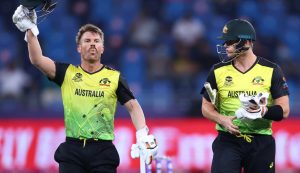 Australia maintained their 100% record at the Men’s T20 World Cup with a dominant seven-wicket win over Sri Lanka.

Chasing 155 for victory, opener David Warner hit a fluent 65 from 42 balls. When he fell in the 15th over Australia needed only 25.

Steve Smith, with an unbeaten 28, and Marcus Stoinis completed the job with three overs to spare.

Sri Lanka’s 154-6 had looked competitive on a slow pitch, but their bowlers struggled as openers Warner and Aaron Finch, who made 37, shared 70 to set Australia on their way.

Australia and England meet in Dubai on Saturday at 15:00 BST, when one team’s perfect record thus far must come to an end.

Warner was under pressure before this game. He was dropped by Sunrisers Hyderabad in the Indian Premier League, made one run in Australia’s two warm-up matches and only 14 in their opening win over South Africa on Saturday.

The left-hander was given a life on 18 when wicketkeeper Kusal Perera dropped a ridiculously easy catch, and Sri Lanka’s bowling was substandard, but this was Warner at his brutal, belligerent best.

His first boundary came from a reverse sweep and that set the tone for his innings. He picked the gaps and refused to let any bowler settle – in stark contrast to how Sri Lanka’s batters played leg-spinner Adam Zampa.

Although Charith Asalanka and Kusal Perera had propelled Sri Lanka to 78-1 in the 10th over, they failed to make the most of that platform as player of the match Zampa took 2-12 from four superb overs.

A rapid unbeaten 33 off 26 balls from Bhanuka Rajapaksa at least gave Sri Lanka’s bowlers something to defend.

However, they failed to build any pressure as wayward bowling allowed Warner and Finch to free their arms in a seven-over partnership which effectively settled the contest. (Courtesy BBC)