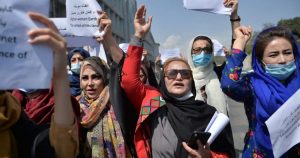 The Joint Statement issued (20 October 2021) by Russia after the Moscow Format meeting, ostensibly on behalf of all the participants talks of recognizing the ‘new reality’ in Afghanistan, which in effect means that the Taliban are here to stay, irrespective of whether the world decides to formally recognize them as the legitimate government or not. The statement inter alia states that “further practical engagement with Afghanistan needed to take into account the new reality, that is the Taliban coming to power in the country, irrespective of the official recognition of the new Afghan government by the international community.”  While this reality has undoubtedly dawned on the people of Afghanistan, particularly the women who are bearing the brunt of the Taliban’s oppressive ways, the reality of social order imposed by the Taliban is an old one!

The Taliban have re-invented themselves as the Islamic Emirate of Afghanistan, just as they had done in 1996 the first time around and their treatment of women, minorities and others has not changed one bit. The persistent bias against women is what led to a group of prominent Afghan women to recently urge the United Nations to block the Taliban from getting a seat on the high table. These women called for obtaining better representation in the government of Afghanistan, during a visit to the UN Headquarters in New York. Former Afghan politician Fawzia Koofi told reporters (22 October 2021) that the UN should give the Afghanistan seat in UN to someone who respected the rights of women.

Fawzia Koofi, Naheed Farid, youngest member of the Afghan Parliament, Asila Wardak, former diplomat and Anisa Shaheed, a journalist, all emphasised that aid, money, and recognition were leverages that the world could use for inclusion of the rights of women, in fact respect for everybody. It merits repetition that when the Taliban took Afghanistan, they said they would give permission to women to resume their jobs and return to school, but obviously they have not kept their promises, said Naheed Farid. The women of Afghanistan recall that under Taliban rule from 1996 to 2001, women were not allowed to work and girls were banned from school. Women had to cover their faces and be accompanied by a male relative when they left home.

Since the takeover of Afghanistan by the Taliban, women have repeatedly stepped out on the streets of Kabul and other cities, protesting at their being marginalised by the new administration. Recently, at least 20 women took the streets of Kabul (20 October 2021) and protested the Taliban for not opening the doors of schools for girls. The all-women protest, staged in front of the Ministry of Education, turned violent as the Taliban started beating journalists and women. The protest was peaceful to begin with as the Taliban had allowed protestors to walk from the Ministry of Education to the Ministry of Finance, turned violent later. Eyewitnesses said that Taliban fighters policing the demonstration beat a foreign and two local journalists.

Protesting women said that no matter what happened to them, they had to make sacrifices so that upcoming generations were given their fundamental rights for work and education. Notably, the absence of women from the Taliban delegation which attended the Moscow Format meeting (20 October 2021) led a group of women activists to issue a statement calling for the formation of an inclusive government, observation of the rights of women, and the facilitation of humanitarian aid to Afghanistan.  However, some women activists said that the Islamic Emirates, despite making promises to stay committed to the rights of women, has yet to act on its commitments.

There is a very valid point made above about using aid as a leverage with the Taliban. There is also the opportunity for international hosts for every summit with the Taliban should insist on the inclusion of women in the dialogue. This would set a precedent for every conversation with the Taliban. At this juncture, the United Nations is considering rival claims on who should represent Afghanistan. The Taliban had nominated Doha-based spokesman Suhail Shaheen as UN Ambassador, while Ghulam Isaczai, the UN envoy representing the Ghani government ousted by the Taliban, seeks to remain in the seat. It is expected that UN member states may take a decision by the end of the year.

With the takeover of Afghanistan by the Taliban, the other challenge is the rise in the cost of living. Several reports say that Kabul residents have complained about the rise in prices of goods in Kabul’s markets in recent weeks. This is because the value of the Afghani has fallen against the dollar in recent days. The drop in the value of Afghanis against the dollar has greatly reduced business in the markets. Currently, one dollar is exchanged for about 90 Afghanis in the Kabul market. Afghanistan is one of those countries that relies on other countries’ imports and needs dollars to buy goods and that is why the Afghani is losing its value in currency markets.

Given this situation, it is not surprising that most Afghans want to leave the country, if they can. A Gallup Poll conducted in September 2019 showed that 41 per cent of all Afghans (in 2018) wanted to leave the country, while 47 per cent of the women wanted to leave Afghanistan. Since 2016, the rise in the percentage of all Afghans who wanted to migrate had been accounted for entirely by results among women, nearly half (47 per cent) of whom in 2018, said they would like to leave.

Notably, Gallup surveys (2018) showed Afghan women were amongst the least satisfied in the world. They had the least freedom to choose what they did with their lives and thus only 33 per cent said they were satisfied with their lives. Even then 80 per cent of women were out of the workforce and 91 per cent had a primary education or less, making it clear that their choices remained limited. These statistics underlie the current attitude of women towards the Taliban, who are not even willing to let Afghan women out of their houses! That is why it is important to keep the pressure on the Taliban to keep to their promises and respect the women of Afghanistan. -(KhaamaPress)