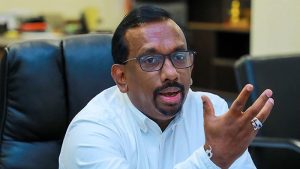 The ship with contaminated fertilizer from a Chinese company will not be allowed into Sri Lanka, Agriculture Minister Mahindananda Aluthgamage said today.

He insisted that samples from the fertilizer on the ship will not even be tested.

Aluthgamage told reporters today that the Government is also not prepared to pay for the fertilizer on the ship.

The Minister said that Sri Lanka will allow the ship to enter the port only if it goes back and brings the fertilizer ordered according to the specifications issued in the tender.

Earlier, China-based Qingdao Seawin Biotech Group Co., Ltd., which had demanded that Swiss SGS group be allowed to re-test samples of the fertilizer.

Seawin said that both parties should unconditionally accept the test results and fulfill its responsibilities.