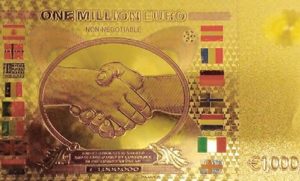 A fake one million Euro note has been seized in Dematagoda and two suspects have been arrested.

Based on intelligence information that was received, the Special Task Force conducted a raid near the Dematagoda bridge.

During the raid, the officers recovered the fake one million Euro note which was to be sold to someone.

Two suspects, including a woman, were arrested following the raid.

Suspect dies after being shot at by STF