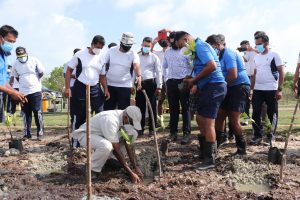 The project launched under the aegis of Commander of the Sri Lanka Navy Vice Admiral Nishantha Ulugetenne, aims to plant mangrove saplings around the coastal lagoons in Jaffna and Kilinochchi Districts, reinstating their commitment to preserve the country’s marine and coastal environment. Tokyo Cement Group extended support to this great initiative by supplying over 3,500 mangrove saplings raised at their mangrove nursery in Trincomalee.

Symbolizing the longstanding partnership between the two champions in marine conservation Mr. S. R. Gnanam, Managing Director of Tokyo Cement Company (Lanka) PLC and Mr. K. Mahesan, Government Agent/District Secretary of Jaffna graced the mangrove planting event organized by the Commander of the Northern Naval Area, Rear Admiral Priyantha Perera, at the Ponnalei causeway at the entrance to Karainagar Island. Key representatives of Jaffna fisheries communities were also present at this occasion to extend support to this remarkable endeavour by the Navy.

Their deep engagement in Tokyo Cement’s Coral Reef Conservation and the Mangrove Reforestation initiatives has helped extend the reach and impact of the programs.

The Navy has so far planted over 20,000 mangrove trees propagated at Tokyo Cement Group’s Mangrove nursery in Trincomalee, along the Eastern and Northern costal belts. Supporting the Sri Lanka Navy in this farsighted initiative to restore the natural mangrove forest in the Jaffna peninsula strengthens this valuable partnership, further reiterating Tokyo Cement Group’s commitment to enrich the country, its people, and the environment.