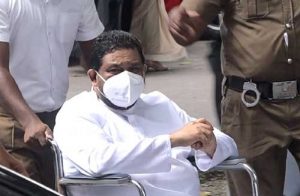 Former Governor of the Western Province Azath Salley was today ordered to be further remanded until 09 November.

Indictments were served on Azath Salley yesterday over a controversial statement he had made at a media briefing.

The Colombo High Court served the indictments on Azath Salley when the case was called before High Court Judge Amal Ranaraja.