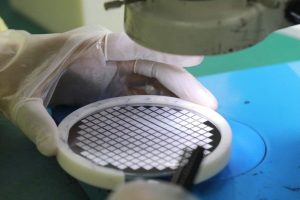 China faces a chronic shortage of scientific and engineering talent that may hamper its efforts to become a semiconductor superpower and reduce its reliance on imported chips, according to industry figures.

The problem is becoming more acute as the fledgling industry evolves amid a dearth of qualified senior professionals, they said.

“If innovation is driven by technology, people are the key to advancing technology development,” said Zhang Wei, dean of the microelectronics school at Fudan University at a recent integrated circuit summit in the Chinese city of Nanjing, a semiconductor base. “Their levels will determine our strength.”

The problem for China is that the country’s talent pool is not keeping pace with its ambition.

The shortfall of talent in the country’s semiconductor industry doubled in 2019 to about 300,000 from 150,000 in 2015, according to a report published this year by the China Institute for Educational Finance Research at Peking University.

While the problem is not unique to China, it could be increasingly detrimental to the country’s quest to gain self-sufficiency in its fledgling semiconductor industry to fend off supply chain risks.

The issue is not one of numbers, but one of quality, according to a recent report by investment bank China International Capital Corporation (CICC). China’s school-trained engineers are still young, meaning there is a lack of industry leaders, especially in chip manufacturing.

In recent years, the number of professionals working in China’s semiconductor industry has increased because of rising salaries and generous government support. In 2016 that support, including direct funding and tax breaks for research and development, accounted for 0.12 per cent of GDP, according to the CICC report.

A few years ago chip design and manufacturing was not an attractive career option for China’s students at all, according to a senior manager at a major US chip company, who wished to remain anonymous.

“Before 2015, it was difficult to recruit graduates from Tsinghua University, Peking University, Fudan University, or Shanghai Jiao Tong University,” he said, referring to the four most prestigious colleges in China. “The top choice for many microelectronics and communication graduates was internet firms.”

As of the end of 2019, China had 510,000 people employed in the semiconductor industry, up by 11 per cent year on year, with 350,000 of those working directly in either design or manufacturing.

By comparison, the US had about 280,000 professionals in semiconductor design and manufacturing.

The proportion of degree holders in the sector in China was higher than in the US in 2019, but the schools attended by the Chinese engineers were lower-ranking than their US counterparts, the report said.

As the birthplace of modern semiconductor technology, the US’s fully developed industry is able to train more mature professionals.

Peng Hu, director of the research department at CICC and a former Huawei Technologies Co. veteran, said China does not lack talented workers in semiconductor design. He cited Huawei’s chip design unit, HiSilicon, which he said had the capabilities to threaten the dominance of top US semiconductor companies.

“China lacks talent in manufacturing, especially those who can master craftsmanship, as it involves many interdisciplinary subjects like physics and chemistry,” said Peng. “Anyone who works on it less than 20 years finds it hard to master.”

China’s top leadership has recognised the talent problem and taken action to address it.

In August 2020, three months after the Trump administration barred Huawei from sourcing chips from the global foundries, China issued its Number 8 policy, a detailed guideline to shore up its semiconductor industry with tax incentives, supportive financing and better training schemes emphasising a blend of academia and industry.

Specifically, it called for making the study of semiconductors a first-degree college discipline and cultivating people with “comprehensive and practical skills”.

Professionals say college courses are fundamental for teaching ideas and theories but may not provide the required practical skills. Therefore, bringing industry and education closer together, mimicking what Taiwan has done in the past, could be the key to success.

“We need enterprises to train the best, schools are not the best place to teach practice,” said Richard Chen, a Taiwanese wafer engineer working in mainland China.

Another solution might be introducing experienced workers from overseas, but the salaries on offer in China and the less developed state of the industry and academic environments could be an obstacle. The average annual salary in China’s semiconductor sector was US$30,000 last year, still a long way behind the US$170,000 earning potential in the United States.

Four years after moving to the US, the senior manager at a major chip firm said he wants to stay “a couple of years” longer for his children’s education and the higher pay.

“Most who opt to stay in the US are perhaps there for a high salary, those looking for big accomplishment would return to China,” he said. (Courtesy South China Morning post)