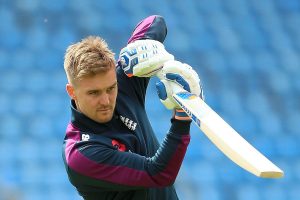 England’s hard-hitting opening batsman Jason Roy, who will play as the icon player of the Delhi Bulls in the fifth season of Abu Dhabi T10, says he is looking forward to learning from the more experienced players in the tournament.

“I think being the icon player is a great opportunity for me to go out there and showcase my skills. It’s a great pleasure and I am very proud to be the icon player, but it’s just a label. I am still looking to learn from the more experienced players. There’s no added pressure on me,” said the Englishman.

Roy added that the Delhi Bulls have got an expressive team for the upcoming season, “We’ve got a few experienced and successful senior members in the team like Dwayne Bravo and Eoin Morgan. I think the Abu Dhabi T10 is one of those tournaments where you have to simplify things and go out there and express yourself. And our team will allow us to do just that as we’ve got quite an expressive team, which is quite exciting.”

While speaking about his biggest responsibility for the Delhi Bulls this season, the opening batter said, “Going for runs from ball 1 or the first over has come quite naturally to me and that will be my job as an opener in the T10 format as well. It will be my responsibility to get the team off to a flyer. The strike-rate is probably the most important thing in T10.”

When asked about Ben Stokes and Jofra Archer’s absence in the England ICC Men’s T20 World Cup 2021 squad, Roy said, “It’s certainly unfortunate that we don’t have Ben Stokes and Jofra Archer for the T20 World Cup, but we have an impressive squad for the tournament. The boys have been training extremely hard. We’ve got players who have more than enough skill and they’ll rise to the occasion.”

The Sky247.net presents Abu Dhabi T10 powered by Wolf777 News will be played held at the Zayed Cricket Stadium in Abu Dhabi from 19 November – 4 December 2021.

Abu Dhabi T10 launched, owned and operated by T Ten Sports Management, having Abu Dhabi Cricket (ADC) as home to the thrilling series is the world’s only 10-over cricket tournament officially sanctioned by the International Cricket Council (ICC) and licensed by the Emirates Cricket Board (ECB).

It brings together over 120 of world cricket’s biggest names to compete in the game’s fastest format. With the support of the Abu Dhabi Government and Abu Dhabi Sports Council, ADC and T Ten Sports Management (TSM) have consistently grown the series and won worldwide acclaim for mounting a successful season in Jan/Feb 2021 despite challenging conditions brought on by the COVID-19 pandemic.

The tournament was safely delivered against a background of strict COVID prevention protocols and gained a global TV audience and praise as a world class event. The fifth edition of this highly popular cricket spectacular will be held over 15 days from November 19-December 4, 2021 taking in the UAE’s 50th National Day weekend. Past Abu Dhabi T10 champions include the Kerala Kings, Maratha Arabians and Northern Warriors.