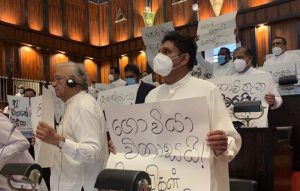 China or India, organic or chemical, fertiliser stinks, especially when imported – or, so it seems. Likewise, if it is power, whether it was China (at Norochcholai) a decade ago, or the US now in the Kerawalapitiya power-plant deal, it shocks the nation. President Gotabaya Rajapaksa’s reiteration of his promise to produce a new Constitution and a new electoral system, as mentioned at Anuradhapura recently, is neither going to remove the stink, nor will they take the shock out of the power deal.

Yes, there is no direct government connections in the China and the US deals – or, so can it be argued. A minister has since clarified that the nano nitrogen liquid fertiliser from India was imported through the nation’s High Commission in Colombo. The supplier, IFFCO is a cooperative in India, and is neither identified with too much with the government (as in China’s case), or a private firm of the American kind — and there is the difference.

Already, Opposition SJB members have protested inside Parliament chambers, holding placards, demanding fertiliser for the farmers. They were only reflecting the wide-spread street-concerns, which derived from the continuing food shortages and mounting fears that the government’s impractical, Tughlaq-like policies may have sowed the seeds of enforced hunger of an inexplicable kind, well into coming years. The reference is to a 14th century ruler in the neighbouring Indian capital of New Delhi, where Muhammad bin-Tughlaq, by fiat kept issuing orders that were unworkable on the ground without adequate consultations – and changed them when the truth became known.

Another Opposition SJB parliamentarian and economist, Dr Harsha de Silva too blamed it all on President Gotabaya Rajapaksa’s  ad hoc decision to ban chemical fertiliser. “Now airlifting chemical nano nitrogen (from India) is too little too late,” he said.

JVP propaganda secretary Vijitha Herath, for his part, claimed in Parliament that the government has deposited $1.275 million in an account of a private company as payment for the recently-imported nano liquid nitrogen fertiliser (urea) from India, in violation of due process. “Due process for this type of transaction is to make payments from the accounts maintained by the Ceylon Fertiliser Company Ltd,”, but a new account in the names of people who were not known to be government officials, was opened for the purpose, he said.

Side-stepping the JVP charge, Agriculture Minister Mahindananda Aluthgamage said that it was the Indian High Commission in Sri Lanka which facilitated the fertiliser imports. “The IFFCO has appointed UFTL as its Sri Lankan representative. That is why the government paid the money to them,” said the minister by way of explanation.

Significantly, no Opposition leader, whether inside Parliament or outside, is known to have questioned the goof-up involved in the import of ‘organic fertiliser’ from China, the mode followed, and also about the payments made, if any. Nor did they ask why Chinese samples, brought in from such a distance by ship, were not tested before placing the orders. Once government scientists concluded that the Chinese fertiliser was not to be used in Sri Lankan farmlands, the government, bowing to the simmering public mood, ordered the Chinese ship back.

All these claims and charges have come in the midst of former Governor of Uva and Southern Provinces, Ranjith Keerthi Tennakoon, declaring that the government was now trying to hand over the import of fertiliser to two multinational companies. According to news reports, the one-time polls monitor alleged that the government had engineered a fertiliser shortage, destroyed enthusiasm for organic agriculture and created an atmosphere where people would accept any fertiliser. “Now, the demand for agro-chemicals among farmers is at an all-time high. It’s now harder than ever to go green because people are convinced that this is an unsustainable form of agriculture,” he said further.

Some academics have since pointed out that the Indian fertiliser is not organic. This does not seem to be aimed at targeting the neighbouring nation, but to underline the point that the government’s policy had failed already, owing to bad planning and fast execution. Some have since propped up the point that the Gota order did not mention any ban on chemical fertiliser, but what was issued was implemented without full understanding.

Yet, when the crisis was brewing and hitting the nation hard on its face, no one at the appropriate levels of government seemed to have realised the mistake, and set in corrective measures. It now looks as if no one at any level seemed to have read the text of the government order, when issued, implemented or since.

SJB Leader of the Opposition Sajith Premadasa also caused eyebrows to raise in the midst of it all, when Chinese Ambassador Qi Zhenhong visited him in the Colombo office of the former. According to Premadasa’s office, the Leader of the Opposition sought Chinese assistance for the nation to tide over the current debt-crisis. This comes at a time when economists, including those in the SJB, have been critical of China’s ‘debt-trap’ economic diplomacy, viz Sri Lanka and other Third World nations.

At the meeting with the Chinese envoy, Premadasa also emphasised the importance of mutual cooperation between the two countries and the importance of friendly bilateral relations that protect sovereignty of Sri Lanka. However, there did not seem to be any reference to the ‘organic fertiliser crisis’ in the country, which at least partially owed to China possibly pushing its stocks without seeking end-user report of any kind in advance.

Ploughing a lone furrow one more time in national politics, the JVP said that the Qingdao Seawin Biotech Group that has sold the weed-ridden organic fertiliser and the Chinese Embassy were influencing the government to have another test of the consignment before taking a final decision. Party leader and parliamentarian Anura Kumara Dissanayake pointed to the claims that ‘they have agreed to another test’, questioned as to whom the reference was to – and wanted the Chinese ship should not be let into Colombo Port after it had been turned back, based on valid lab tests.

If controversies surrounding the fertiliser issue has remained societal as difficulties mount, and political when it comes to criticism and condemnation, the sale of Kerrawalapitiya gas-based power-plant has also taken an added, religious tone. Interestingly, Malcolm Cardinal Ranjith, the Archbishop of Colombo, and a Buddhist monk, Ven. Elle Gunawansa Thera, have together moved a fundamental rights petition before the Supreme Court against the share-transfers pertaining to the 310-MW Yugadanavi LNG Power Plant in Kerawalapitiya to the US firm, New Fortress Inc.

The petition, with 54 respondents, including Prime Minister Mahinda Rajapaksa, seeks to nullify the Cabinet to transfer 40-per cent stake in the company owning the Yugadanavi Power Plant to the US firm in question was not justified. Submitting that the Cabinet had failed to focus on national economy and national security before taking the decision, the petition said that the fundamental rights of the citizenry and their future generations guaranteed under Article 12(1) of the Constitution have been infringed upon, through the deal.

The two prelates, from the Catholic and majority Buddhist communities, have since been followed by the Opposition SJB. Another petition on similar lines have been filed by a second Buddhist monk, Ven Bengamuwe Nalaka Thera, Dr Gunadasa Amarasekara and Dr Wasantha Bandara. Of the three, Dr Amarasekara is the convenor of the Federation of National Organisations, purportedly a Sinhala-Buddhist rights outfit that has generally been sympathetic to the Rajapaksas in matters political and electoral.

Surprisingly, President Gota administered a further shock, when he refused to meet his ruling SLPP’s alliance party leaders to discuss the power deal. The President has said that the matter should either be discussed in the Cabinet meeting or the Government group meeting. He also sought to give it all a political colour by reportedly saying that  concerns on political decisions taken by the SLPP should be discussed with Prime Minister Mahinda as party leader and Finance Minister Basil Rajapaksa in his capacity as the party’s national organiser.

According to reports, 11 political parties that are part of the SLPP-led alliance had sought the meeting with President Gota. But by reducing what was essentially a Cabinet decision into a political decision, the President may have gone farther than irritating the allies, who have been more assertive in the past months, including commenting on the internal affairs of the SLPP as a party.

Incidentally, it is the kind of argument that the then ruling SLFP under incumbent President Mahinda Rajapaksa kept taking on the much-maligned and even more forgotten Tissa Vitharana Committee Report on furthering power-devolution during the war years in the previous decade. After constituting a minister-led panel, which the main Opposition UNP of the day and the TNA boycotted, government ministers said that the SLFP would be taking a call before presenting the report to the full Cabinet and to Parliament, subsequently. The report never saw the light of the day.