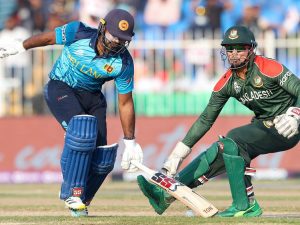 Facing a stiff target, Asalanka, who came out to bat in the first over at the loss of Kusal Perera, took on Bangladesh’s spinners early. In just his third ball, his slog sweep brought him four, and the shot continued to be a rewarding one for him through the innings.

Nasum Ahmed, the left-arm spinner, who was playing his first game of the tournament, had bowled Perera first up, but got smacked for two sixes on either side of the wicket when he returned for his second.

Pathum Nissanka got into the attack himself in the last over of the fielding restrictions, as Mahedi Hasan went for 16.

At 54/1 after six overs, Sri Lanka had won the Powerplay battle for the day.
Just when Sri Lanka were bossing the chase, Shakib returned for his second over to remind fans just why he is a premier all-rounder. He bowled full lengths with flight and drift to take two wickets and concede just one in the ninth over.

He had Nissanka bowled, before sending back Avishka Fernando for a duck with a straighter one.

Wanindu Hasaranga then couldn’t get on top of a slower ball from Mohammad Saifuddin, offering a high catch to Naim.

However, that was the last bit of joy that Bangladesh had in a while, as birthday boy Rajapaksa joined Asalanka in the middle to steady the innings.

The two left-handers put together a match-defining stand of 86 off just 52 balls.

Rajapaksa quickly settled Sri Lankan nerves with an inside-out six over extra cover, and grew in confidence to attempt runs at the longer boundary as well.

Asalanka danced down the track to Mahmud Ullah before slog sweeping the off-spinner to collect two sixes in the 14th over. Rajapaksa then took 22 off Saifuddin in the 16th over, to comprehensively turn the game Sri Lanka’s way.

Bangladesh paid for dropping two catches in the deep at crucial times, with Liton Das the man responsible for giving both batters a life each.

Rajapaksa couldn’t stay till the end, bowled by Nasum while going for the cut shot, but with just seven needed off 10 balls by then, the bulk of the work had been done.

Asakanka fittingly hit the winning runs behind square, finishing unbeaten on 80 off 49 balls, with five sixes.

Earlier, with mystery spinner Maheesh Teekshana nursing a side strain, Sri Lanka went with a four-man pace attack, bringing in Binura Fernando, the left-arm quick. However, having chosen to bowl, they weren’t able to make the early breakthroughs they have become accustomed to in round one.

Bangladesh enjoyed one of the strongest Powerplays of their tournament. This period of play has been identified as an area of concern for them, but on this occasion, the openers added 40 in 5.5 overs.

Lahiru Kumara struck back in the penultimate ball of the Powerplay, when Das, who made room for himself to drive, found the fielder at mid-off.

Even as tempers ran high in the middle, Naim held up one end to bring up his second half-century of the tournament. He survived a run-out chance and reached the milestone in 44 balls, with a single-bounce four down the ground.

Meanwhile, the diminutive Rahim made up for his recent batting struggles by coming out blazing. He kept the pressure on the bowlers with a couple of slog sweeps for six, off both left-hand pace and spin.

Wanindu Hasaranga and Fernando came in for more punishment. Even when Fernando got the wicket of Naim, who top-edged a pull, the scoring rate wasn’t affected.

Mushfiqur’s half-century came off just 32 balls. It was the sixth of his career and his first in the format since November 2019.

He finished unbeaten on 57 off 37 balls, with five fours and two sixes. Although at the midway point of the game it seemed a considerable total, it was not to be for Bangladesh.