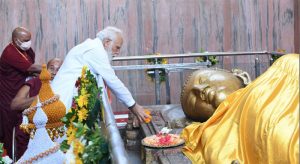 Kushinagar: In the presence of a high-level Sri Lankan delegation, Indian PM Narendra Modi on Wednesday inaugurated the Kushinagar International Airport in Uttar Pradesh and described the initiative as a tribute to the devotion of Buddhist society across the globe.

The Prime Minister said that India is the centre of the faith of Buddhist society around the world and this region (Kushinagar), is witness to the entire journey from the enlightenment of Lord Buddha to Mahaparinirvana.

“Today this important region is getting directly connected to the world,” he said.

The Prime Minister highlighted the special focus on the development of the places associated with Lord Buddha through better connectivity and the creation of facilities for the devotees.

The Prime Minister welcomed a Sri Lankan flight and delegation that landed at Kushinagar.

“Development of Kushinagar is one of the key priorities of the UP and central governments,” he said.

The Prime Minister said that tourism in all its forms, whether for faith or for leisure, needs modern infrastructure which will have rail, road, airways, waterways, hotels, hospitals, internet connectivity, hygiene, sewage treatment and renewable energy, among other facilities.

“All these are interconnected and it is important to work on all these simultaneously. Today’s 21st century India is moving ahead with this approach only,” the Prime Minister said.

A delegation, led by Sri Lanka’s Cabinet Minister Namal Rajapaksa, son of Prime Minister Mahinda Rajapaksa, who is currently serving as the Minister of Youth & Sports, arrived in Kushinagar from Colombo on the auspicious Vap Poya Day.

Vap Poya Day is considered as an important religious event by Buddhists in Sri Lanka.

Buddhism is considered to be an important bridge that connects the people of India and Sri Lanka.

Kushinagar enjoys a pre-eminent position on the global map due to its rich heritage.

The Buddha breathed his last and attained Mahaparinirvana in this holy city. Other sites of Buddhist significance such as Sravasti, Kapilvastu and Lumbini are also not located very far off.

All these factors attracted devotees from several countries such as Thailand, Cambodia, Japan, Burma to Kushinagar and they used to offer daily prayers at the Mahaparinirvana Temple before COVID-19.

Therefore, there has been a long-standing demand for an international airport in Kushinagar.

“The inaugural international flight from Sri Lanka would pave the way for increased traffic and greater number of visitors to Kushinagar particularly from Buddhist countries, including Sri Lanka,” sources told IBNS. –(IndiaBlooms)