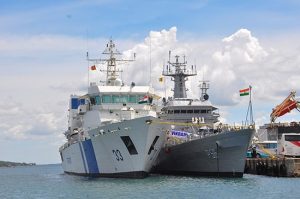 The six ships are part of the Indian Navy’s First Training Squadron and they are in Sri Lanka for a training interaction with their counterparts in the Sri Lanka Navy.

The ships are helmed by Capt. Aftab Ahmed Khan, Senior Officer of the First Training Squadron.

The visit marks a milestone in the history of bilateral relations, where in for the first time such a large number of Indian Navy ships have visited Sri Lanka.

The ships visiting the Port of Colombo are Landing Ship Tanker (Large) Magar & Shardul and Offshore Patrol Vessel INS Sujata, Sail Training Ships Sudarshini & Tarangini along with Indian Coast Guard Ship Vikram are visiting Trincomalee. A total of 75 x officers, 153 x officer cadets, 10 x NCC cadets and 530 x sailors form part of the visit. During their stay, a series of professional, training, cultural and sports interactions are scheduled between the ships’ crew and Sri Lanka Navy personnel. The ships would depart by 28 October 21.

The visit of the ship also coincides with the visit of the Flag Officer Commanding in Chief, Southern Naval Command Vice Admiral Anil Kumar Chawla, PVSM, AVSM, NM, VSM. The Admiral would be calling on the senior leadership in Sri Lanka and visiting Colombo, Trincomalee and Galle. During the visit interaction with key Area Headquarters is planned in addition to visit at Naval and Maritime Academy at Trincomalee. Discussions on areas of common maritime interests and training would be pursued since Vice Admiral Chawla is also heading the training Command of the Indian Navy.

The First Training Squadron which comprises six ships including two sail ships is a part of Indian Navy’s prestigious Southern Naval Command (SNC). Ships from the First Training Squadron had last visited Sri Lanka in 2015. SNC is the Training Command of the Indian Navy which conducts the entire range of naval training for officers and sailors, including those from friendly foreign countries. As one of the finest destinations for training, Indian Navy has trained more than 11,000 international trainees from over 40 countries in the last four decades. The Southern Naval Command is headed by Flag Officer Commanding-in-Chief, Vice Admiral Anil Kumar Chawla, PVSM, AVSM, NM, VSM, ADC who is also arriving in Sri Lanka on a four-day official visit from 24-28 October 2021.

Training has been one of the strongest and most enduring pillars of India – Sri Lanka bilateral defence cooperation and this visit will provide further impetus to the same. In line with the vision of both Prime Minister Narendra Modi and H.E. President Gotabaya Rajapaksa to increase people to people connect between both countries, this visit will positively contribute towards strengthening the existing bonds of camaraderie and friendship between defence personnel of both the countries. (Colombo Gazette)