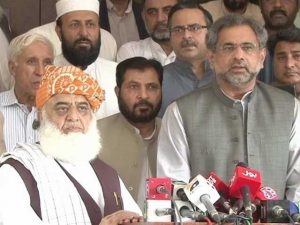 PML-N President Shehbaz Sharif and JUI-F chief Maulana Fazlur Rehman on Sunday decided that the opposition would launch a campaign against the “unprecedented” rise in inflation.

The two leaders, while speaking on the phone, observed that they needed to leave their homes to “save the nation from inflation, unemployment and the ongoing economic catastrophe across the country”.

Shehbaz, the opposition leader in the National Assembly, and Fazl, the head of the opposition alliance Pakistan Democratic Movement (PDM), decided that the protest movement would include demonstrations, rallies, and marches across the country.

They agreed to join the protest movements of other opposition parties, which were not part of the alliance.

The former Punjab chief minister also consulted with his elder brother, former convicted premier Nawaz Sharif who is in the UK, on the matter and the latter endorsed the decision.

Later while speaking to the media, Fazl, accompanied by PML-N Senior Vice President Shahid Khaqan Abbasi and Pashtunkhwa Milli Awami Party (PkMAP) chief Mahmood Khan Achakzai, said inflation bombs were being dropped every day and the common man had been forced to end their lives.

“We have announced protests all over the country for next two weeks. Demonstrations will be held from each district headquarters after the completion of the 12th Rabiul Awwal celebrations,” he added.

The PDM chief told the media that the provincial and district organisations of the alliance had been asked to contact people from all walks of life.

“We appeal to the people to come out of their homes to fight this storm of inflation.”

He maintained that people have been overwhelmed by the burden of the price hike of petroleum products. “The price of petrol has gone up by over Rs30 since June. The government has become the watchdog of the IMF instead of protecting the interests of the country and the nation.”

A journalist asked him if he would support PM Imran’s call for civil supremacy. In reply, the Maulana said, “I object to your question calling Imran Khan the prime minister. We will not support him in any way.”

The PDM will hold a meeting on Monday (today) chaired by Fazl at the PML-N secretariat. It will be attended by leaders of all component parties of the alliance. The agenda includes the rising inflation and electoral reforms. A strategy will be chalked out for the anti-government movement.

Separately in a statement issued by the party’s official Twitter handle, the PML-N president lashed out at the PTI-led government for its “insensitive” policies, which were “breaking the back of the common man”.

He pointed out that despite accepting all the International Monetary Fund’s (IMF) conditions, negotiations with the global lender had still failed. “What sort of a strategy is this?”

Shehbaz demanded that now that the talks with the IMF had failed, the government should revoke its decision to increase prices.

He maintained that the PTI-led government’s “three years of blind obedience to the IMF” had reaped no benefits because the people continued to suffer and it had failed to achieve anything.

“The PTI government is weakening the relationship between the State and its citizens by constantly spreading frustration and confusion as a result of its incompetence,:” he added.

“The situation is very dangerous and the serious implications of the growing anti-people and insensitive policies of the rulers are extremely disturbing.”

The former Punjab chief minister claimed that the current government had been involved in the “economic murder” of people for the last three years.

He added that the government should explain why it had to increase the prices of electricity, gas, petrol, flour, and sugar.

“The government should also let the nation know what talks were held with the IMF.”

The PML-N president pointed out that when the PML-N government, led by then premier Nawaz Sharif, completed the IMF’s programme in 2015, PTI Chairman Imran Khan continued to criticise him.

He further recalled that Prime Minister Imran used to chant slogans back then that he would rather commit suicide than approaching the IMF. –(Tribune)