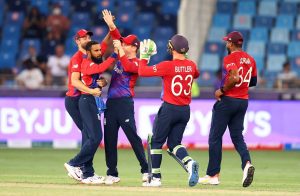 England bowled West Indies out for 55 as they made a stunning start to their Men’s T20 World Cup campaign with a six-wicket win in Dubai.

In a near-perfect bowling performance, England humiliated the defending champions by dismissing them in 14.2 overs.

Adil Rashid took a barely believable 4-2 while Moeen Ali and Tymal Mills were brilliant, both claiming 2-17.

Chris Gayle was the only West Indies batter to reach double figures in a feeble batting display – the second-lowest total against England in T20s.

Although England lost four wickets as they attempted to wrap up victory and increase their net run-rate in Group 1 of the Super 12s, it was still a statement opening win from the world’s top-ranked side and one of the tournament favourites.

Opener Jos Buttler ended 24 not out as the chase was completed with a massive 11.4 overs to spare.

“It is as good as it gets,” said England captain Eoin Morgan.

England – bidding to become the first team to hold the 50-over and 20-over World Cups – face Bangladesh in Abu Dhabi on Wednesday and Australia in Dubai next Saturday.