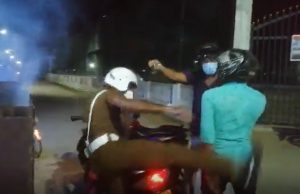 A policeman attached to the Eravur Police has been interdicted over a karate style assault on two people who were on a motorcycle in Batticaloa.

The entire incident was captured on video and shared on social media.

In the video initially shared on twitter by Tamil National Alliance (TNA) Parliamentarian Shanakiyan Rasamanickam, the policeman is seek kicking one person and slapping another.

The incident had taken place yesterday after the motorcycle rider had failed to stop when ordered to do so by the Police.

Rasamanickam posted a screenshot today of a text message sent to him by Weerasekara.

In the text message, Weerasekara says the policeman had been measuring the road where an accident had taken place.

The motorcycle had then gone past the policeman and dragged the measuring tape.

The policeman gave chase and stopped the motorcycle and assaulted the rider and pillion rider.

The Minister had condemned the incident and ordered action to be taken against him. (Colombo Gazette)

A cop seen putting his “training” to use in Batticaloa 🙄 And this is just one of few incidents that get caught on camera #Srilanka #lka #policebrutality pic.twitter.com/fEm1UpbrWm