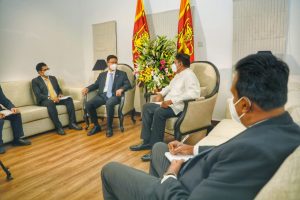 Leader of the Opposition Sajith Premadasa met the Chinese Ambassador to Sri Lanka Qi Zhenhong and requested assistance to manage the debt crisis in Sri Lanka.

The Leader of the Opposition also requested required assistance to manage debt crisis Sri Lanka has faced at present for progress and prosperity of the country.

The Chinese Ambassador recalled the long-standing relationship between the two countries and also stressed its importance. (Colombo Gazette)