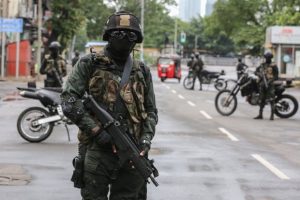 The gazette extraordinary notice, which has been issued every month, orders the military to remain on standby to maintain public order in specific areas.

“By virtue of the powers vested in me by Section 12 of the Public Security Ordinance (Chapter 40), I, Gotabaya Rajapaksa, President, do by this order call out with effect from October 22, 2021 all the members of the Armed Forces specified in the First Schedule hereto, for the maintenance of public order in the areas specified in the Second Schedule hereto,” the gazette notice states.

The military has been kept on standby to maintain public order in all 25 Districts in Sri Lanka, including along the adjoining territorial waters. (Colombo Gazette)