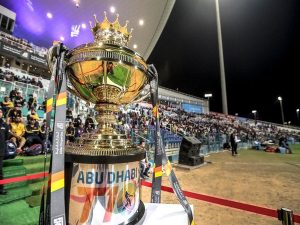 The world is currently witnessing the biggest cricket carnival in the United Arab Emirates with the ICC Men’s T20 World Cup being held from 17 October 2021 to 14 November 2021 and thereafter the high-octane Abu Dhabi T10 will be played in the UAE capital from 19 November to 4 December 2021.

As many as 32 players, who have been drafted in the Abu Dhabi T10 franchises for the fifth season of the tournament, will be in action for their respective countries at the ICC Men’s T20 World Cup 2021.

Destructive players such as Paul Stirling, Mark Adair, Curtis Campher and Joshua Little will represent Ireland, meanwhile, Mohammed Saifuddin will feature in the Bangladesh team and David Wiese will play for the Namibia team in the ICC Men’s T20 World Cup 2021.

Abu Dhabi Cricket (ADC) is home to the thrilling Abu Dhabi T10 series – the world’s only 10-over cricket tournament officially sanctioned by the International Cricket Council (ICC) and licensed by the Emirates Cricket Board (ECB).

It brings together over 120 of world cricket’s biggest names to compete in the game’s fastest format.

With the support of the Abu Dhabi Government and Abu Dhabi Sports Council, ADC and Ten Sports Management (TSM) have consistently grown the series and won worldwide acclaim for mounting a successful season in Jan/Feb 2021 despite challenging conditions brought on by the COVID-19 pandemic. The tournament was safely delivered against a background of strict COVID prevention protocols and gained a global TV audience and praise as a world class event.

The fifth edition of this highly popular cricket spectacular will be held over 15 days from November 19-December 4, 2021 taking in the UAE’s 50th National Day weekend. Past Abu Dhabi T10 champions include the Kerala Kings, Maratha Arabians and Northern Warrior who have twice taken the title.