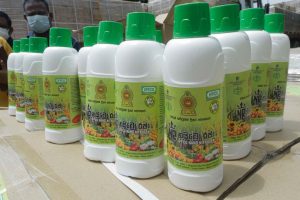 It is significant that Sri Lanka is under the obligation of China, since the growing superpower is offering loans and grants along with other freebies as part of their expansionism in the island nation is taking root.

Lately, the Sri Lanka-China relationship has soured due to an organic fertilizer fiasco.

Despite the testing of the samples twice and finding them to be contaminated, Qingdao Seawin has loaded 12,150MT of organic fertilizer into Sri Lanka on a vessel named Hippo Spirit that had sailed to Singapore Port from Qingdao Port. This has surprised the authorities of the Ministry of Agriculture. It is unclear whether the ship has sailed back to China or not.

Since time was running out for fertilizer for the paddy cultivators, the Ministry of Agriculture cancelled the controversial Chinese organic waste, and requested India to import their nano nitrogen liquid fertilizer (Nano urea) at a cost of Rs. 9bn on Tuesday (19).

Dr. Ajantha de Silva, Director-General of the Department of Agriculture, told local media that 2.1 million liters of Indian nano urea would be imported.

Since there is a massive shortage of fertilizer after banning chemical fertilizer, local farmers began protesting and demanding more fertilizer, and ultimately, the government gave up on their fight to make organic farming key to Sri Lanka.

The Chinese were demanding and challenging the test report and apparently sent their cargo of organic fertilizer forcefully, and that had angered many food scientists in Sri Lanka.

They openly accused the Chinese Embassy of getting involved and humiliating the scientists of Sri Lanka over their credibility in testing fertilizer samples.

When it was ruled out that the Chinese fertilizer was contaminated, the Chinese Embassy in Colombo accused the scientists in Sri Lanka for ‘wrongly’ testing the samples sent by Qingdao Seawin.

Sri Lanka is facing a massive foreign debt crisis, having to pay around 1bn USD by the end of 2021, and has banned imports to control the dollar outflow. In the process, the government has banned the importation of chemical fertilizer and said it would introduce cheap organic fertilizer, to which China agreed to send its sample.

However, the official procedure is that samples of the said cargo should be tested under the Plant Protection Act No. 35 of 1991, and the National Plant Quarantine Services (NPQS) of the Department of Agriculture for zero contamination. But the laboratory test report said that it was highly contaminated with several bacterial species, including Erwinia spp, Bacillus spp, and that the fertilizer was not sterile.

The Chinese Embassy immediately made a statement that the Embassy of China in Sri Lanka contacted the product supplier, Qingdao Seawin Biotech Group Co., Ltd. to examine the said issue, and found out that these reports and statements have already harmed the reputation of the company in question.

The Embassy boasted that Qingdao Seawin is a high-tech enterprise focusing on the production of new-type seaweed organic fertilizers, and its products, which have passed the EU ECOCERT Organic Certification, OMRI Certification, REACH Certification, and Australian Organic Input Certification, etc., have been exported to more than 50 countries and regions in the world, including Europe and the United States. It has also set up overseas branch companies in the US and Australia.

The Chinese Embassy said their company had undertaken obligations strictly in accordance with the signed contract. In their production process, the organic fertilizer must be sterilized at 600 ℃, thus all harmful microorganisms are killed by the high temperature, which is in line with the standards required in the bidding documents, the contract, the letters of credit as well as the widely accepted international standards for organic fertilizers.

The Chinese claimed that the organic fertilizer had been sterilized, but the NPQS argued that if it was sterile, how could there be harmful bacteria such as Erwinia?

China said the Sri Lankan authorities had made a hasty conclusion and the NPQS lacked a scientific basis. As such, the decision made by the authorities to reject Seawin’s organic fertilizer based on the NPQS report is not only questionable but also causes great financial loss to the company,” the Chinese Embassy in Colombo said.

The Chinese Embassy further added that they hope that the related parties on the Sri Lankan side and the Chinese company can coordinate on the principles of respecting science and facts, as well as the spirit of the contract, in order to resolve this issue quickly and address differences through dialogue in good faith for the mutual benefit of China-Sri Lanka cooperation.

The NPQS gave the Chinese company a second chance to send a new set of samples for testing and that too failed. However, Sri Lanka learnt that before the report of the second laboratory report was out, Qingdao Seawin had loaded 12 MT of organic fertilizer, is on its way from China.

But it is still unclear who issued the permit for importation of the contaminated organic fertilizer.

The local media reported that the Director General of the Department of Agriculture,  who has the authority to issue permits for the importation of the fertilizer from Qingdao Seawin , in fact, did not issue it. He told the media that he is the only person who has the authority to issue the permit and he also does not understand how the ship could even come to Sri Lankan port to unload the fertilizer that Sri Lanka had already cancelled. He added that they will not entertain the ship and there is no way they could offload the cargo at the Colombo Port.

The Director General claimed that even the Minister of Agriculture, Mahindananda Aluthgamage, had vehemently opposed the organic fertilizer from China.

On October 15, 2021, Chairman of Ceylon Fertilizer Company Ltd (CFC) under the Ministry of Agriculture, Janatha Vidanage, wrote to the Chairman of Qingdao Seawin and its local agent, Managing Director Lolitha Abeysinghe, that the final test results of the Qingdao Seawin’s organic fertilizer samples were highly contaminated.

The letter noted that the NPQS final report, dated October 4, 2021, samples were contaminated with several bacterial species, including Erwinia spp. and Bacillus spp., and therefore could not be considered sterile. Hence, the sample does not comply with the Sri Lankan Standards, and therefore, their stand was that the stock of fertilizer in the vessel MV Hippo Spirit is not in conformity with the conditions of the contract.