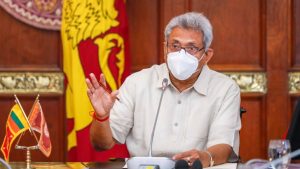 President Gotabaya Rajapaksa says he would never ask anyone to do anything wrong.

The President had said this at a meeting with Agrarian Service Officers held via video technology, today (21), the President’s Office said.

President Rajapaksa emphasised that doing what is right is a big challenge but yet the desired goals can be achieved by moving forward together.

The President pointed out that the desired objectives could be achieved by resolving difficulties faced by the farmers.

He said the main objective of the Government is to create an environment where farmers can earn a better income while protecting the environment and public health.

The President pointed out that it is the responsibility of officials to identify the issues faced by farmers and make the Government aware of it in order for those issues to be resolved.

“The President also stressed to the officials that he would never ask anyone to do anything wrong,” the President’s office said.

The President’s office also said that the Government took steps to import liquid nitrogen enriched with nitrogen nutrients in order to provide the world’s most recognized eco-friendly fertiliser to the farmers. (Colombo Gazette)