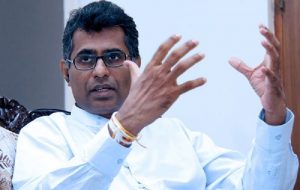 He said that he had been questioned by the CID recently over the conversations he had using WhatsApp.

Ranawaka said that WhatsApp calls are encrypted and Sri Lanka did not have the technology to tap such conversations.

However, he said that the CID seems to have got its hand on the technology to tap WhatsApp calls.

The MP had appeared before the CID last month and was questioned over transactions made when he was a Minister in the former Government.

Ranawaka said that when being questioned by the CID it was revealed that details of telephone calls made in 2018 and 2019 had been obtained.

The MP said that telephone calls can be monitored only through a court order.

He said that the telephone conversations had been made using WhatsApp. (Colombo Gazette)