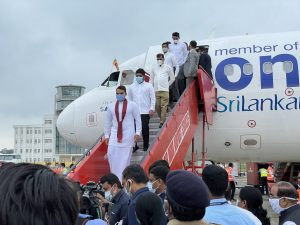 The delegation from Sri Lanka on the inaugural flight was led by Namal Rajapaksa, Minister of Youth and Sports, Minister of Development Co-ordination and Monitoring and State Minister of Digital Technology and Enterprise Development.

The delegation also consisted of State Ministers and one MP in addition to close to 100 senior Buddhist monks, belonging to different sects and prominent temples, spread across Sri Lanka. Senior officials from Sri Lanka were also part of the delegation.

Kushinagar is considered to be a focal point of the Buddhist Circuit in India and the new international airport is likely to strengthen people to people interactions between India and Sri Lanka substantially. The inaugural flight not only underscores the deep people to people linkages but also millennia old civilizational ties between the two neighbouring countries. Buddhism is central to the abiding cultural, spiritual and linguistic bonds in this bilateral relationship.

The Sri Lankan delegation will also visit Varanasi during their stay in India. Special prayers shall be held at the Kashi Vishwanath Temple for the delegation on 20 October 2021. They will also have a Ganga Darshan before they return to Colombo on the afternoon of 21 October 2021. (Colombo Gazette)