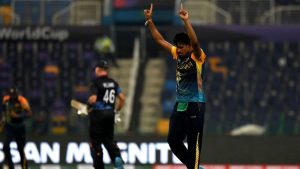 An all-round display from Sri Lanka was too much for Namibia to handle, with Dasun Shanaka’s men beating the Associate side by seven wickets. Spinner Maheesh Theekshana was primarily responsible for bamboozling the Namibian batting line-up, who didn’t find any rhythm all innings, collapsing to 96 all out inside 20 overs.

A brief stutter at the start of the innings from Sri Lanka in the chase looked like it had given Namibia a faint glimmer of hope. Ruben Trumplemann, Bernard Scholtz and JJ Smit each picked up a wicket to send Sri Lanka’s top three on their way, but just when Mickey Arthur and his side began to get tingly, along came a fourth-wicket partnership to resume normal service. Bhanuka Rajapaksa and Avishka Fernando added 74 for the fourth wicket, easing to their target with 39 balls to spare.

Just as Ajantha Mendis used to utterly befuddle Associate sides’ batting orders that had not seen much of his bowling before, Sri Lanka’s newest mystery spinner – Maheesh Theekshana – was Namibia’s primary destroyer. He claimed a wicket with his very first delivery (in the Powerplay no less) when Stephan Baard ran at him first ball, and managed only to miscue him high to mid off. Zane Green also holed out trying to hit Theekshana in the Powerplay, that catch going to mid on. Then, in the sixteenth over, Theekshana bowled Jan Frylinck with what seemed to be a carrom ball. In his very first World Cup match, his figures were 3 for 25.

Namibia had only played one T20I against full-member opposition before this match. They would rarely have faced an attack with two bowlers capable of breaching 145kph. Dushmantha Chameera claimed only one wicket, but was especially quick in this game, hitting 149kph at one point, and hitting opener Zane Green on the helmet with a 147kph delivery. His two Powerplay overs cost only 11.

Lahiru Kumara was not quite as fast, but frequently bowled quicker than 140kph, and was perhaps the bowler of the match. He delivered one over in the Powerplay, two in the middle overs, and one at the death (he could only bowl three balls before the innings ended), claiming figures of 2 for 9 from his 3.3 overs.

Top order batting is by a distance Sri Lanka’s worst suit, and just as they had against Oman and Bangladesh in practice matches over the past two weeks, Sri Lanka lost early wickets. Kusal Perera looked good while he was at the crease, but was the first to go, mis-hitting a Ruben Trumpelmann slower ball to mid off. Neither Dinesh Chandimal nor Pathum Nissanka looked particularly comfortable at the crease, and sure enough, they both perished in quick succession as well – Nissanka trapped in front by a sliding delivery from Bernard Scholtz, before Chandimal edged Johannes Smit behind. That wicket left Sri Lanka 26 for 3, and seemingly in some trouble.

In the end, though, Namibia had not put up enough to really test Sri Lanka. Fernando could take his time playing himself in, even if Rajapaksa was a little more anxious to get some early boundaries. Even when two or three successive dot balls came, they did not exert substantial pressure. Soon, the bad balls were being picked off with increasing ruthlessness, and Sri Lanka were marching towards their total. Rajapaksa was dropped at the boundary by Scholtz on 18, but otherwise played a decent innings, hitting two sixes and four fours in his 42 not out off 27. Fernando finished with 30 off 28. Their unbeaten partnership was worth 74. (Courtesy ESPN Cricinfo)