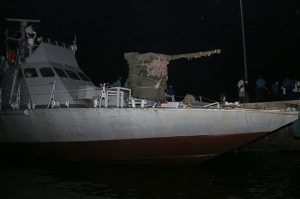 An Indian fisherman has been reported missing after his fishing boat collided with a Sri Lanka Navy craft and sank.

The Sri Lanka Navy said that it managed to rescue two fishermen aboard the sunken Indian fishing boat which was poaching in Sri Lankan waters northwest of the Kovilan Lighthouse last evening.

The Navy said that a search and rescue operation is underway to locate another fisherman who was reported missing following the incident.

According to the Navy media unit, Navy boats had chased away Indian fishermen who crossed into Sri Lankan waters last evening.

However, the Navy said that one Indian fishing trawler made “aggressive manoeuvres” and refused to leave.

The boat then crashed into a Navy craft and sank in rough seas. Two fishermen were rescued while one person was reported missing.