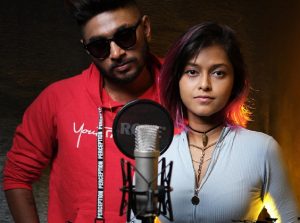 Yohani de Silva…. If the name strikes a chord in every Sri Lankan, here or elsewhere, there is a reason. It is not about her chart-buster of the YouTube song, ‘Manike Mage Hithe’, with Satheesan…. Or, even about her fresh and husky voice that is young, enchanting and energising, all of it at age 28. For first-time viewers of Sinhala music’s new-found love, she is much younger with the next-door neighbour-look, a talented daughter you always wanted to clap for.

Once launched in India, through a series of appearances in recent weeks, there are Tamil and Malayalam, Telugu and Hindi versions of ‘Manike Mage Hithe’…. There should be similar local versions / variants of the same, wherever the original had reached. Sooner than later, at least in a dozen languages (most of them Indian?), there would be film songs, borrowing from the tune. Whether they can imitate Yohani’s husky voice, or if they would have the original voice crooning those songs, however, remains to be seen.

It is all about the freshness of the face that Yohani exudes in the video, the carefree confidence that is infectious for an audience that can forget all its daily problems, even if momentarily. That the nation’s problems and that of its population are only mounting by the hour has made the ‘Manike Mage Hithe’ moment, possibly the only relief for a people who can do with greater and more realistic relief, even more and faster, too.

No, this is in no way to under-estimate Yohani’s achievement. Look at it differently, and you will acknowledge that these are the kind of small moments that has provided the much-needed relief to a population that is harassed in every which way. If she is also on news channels these days, the viewer otherwise gets to see only long queues waiting for, yes, milk-powder, and worse still, kerosene stoves, which too have become dearer after the steep hike in cooking gas cylinder prices.

Maybe, not just the younger generation but also the older generation across the country, the rich and poor alike, owes those fleeting moments of sur-realistic other world experience to this young lass. Now you know why she deserves the declared State honour and more – which rather the nation owes Yohani, Satheesan and team.

The mass hysteria over Yohani and her ‘Manike Mage Hithe’ – the cause and effect have become inter-changeable owes, yes, to social media and its dominance over every-day life of everyone, politician to professional, young to the old, and poor to the rich. A decade earlier, this much of adulation would not have been possible, though the voice and song would have enslaved those that had a chance to hear her, which was mostly on audio-recording. The video experience has enhanced viewer-pleasure, most definitely.

Beyond the musical treat and context, what does the ‘Manike Mage Hithe’ moment mean and imply? In a way, it is music as entertainment and enchantment. At another level, it is self-deception, however momentarily, from the multiple woes that have been giving the man on the street, sleepless nights, for a long time now. Definitely, these are the people who had not prepared for one crisis after another, after what they had thought was the worst in their lives, namely, LTTE terrorism and what it meant for and in their daily lives. They went into a relax-mode too much, too early, and their coping mechanisms refuse to re-emerge to be of help.

To the older generation, the Easter blasts brought back memories of sordid times that they did not desire even on their enemies. Apart from death and destruction, to them it also meant living on borrowed time eternally, as during LTTE days. Time was when both parents travelled separately to the same destination, including their own house/home. Children, old or infirm in the family, they would split between them, lest an LTTE-triggered blast took them all away, at one go. At least, there will be survivors to tell the tale to their future generations – or, that seemed to be their illogical logic.

Still, there were the youth, who felt equally fearful and excited when Zaharan & Co executed serial-bombing on that fateful day in April 2019. Soon, even for them, excitement gave way to realism, and the fear of the future gripped them too. The sudden hit that the nation’s tourism industry took came as a rude shock for them all, as there was no money in the family till, for them to spend with gay abandon, as the phrase goes.

Parents wore worried looks and that has since gripped their children, young and not-so-young. Like with ‘Manike Mage Hithe’ now, they saw more of it on TV and YouTube. They learnt even more from social media posts that they received – not all of them proven. Most of them could not avoid the temptation of reading more on Google and Wikipedia. Each one of them became an expert, a scared expert.

Yes, Covid pandemic did strike the nation. It was definitely worse in proportion when compared to most others, yes. Why did those nations not produce a ‘Manike Mage Hithe’ moment? The world has seen such moments in arts and literature at the hopelessness of wars that nations had fought, through it and after it. Modern and post-modern artforms and literature owe their origins somewhere there. But not this time. Or, at least we have not heard of anything close to the ‘Manike Mage Hithe’ moment in each or any of them. Not, yet, at least.

That’s because those nations are fighting only the pandemic. Even there, rich nations like the US has had the luxury of fighting within on what needed doing. While this nation and most others were arguing on the length and severity of lock-downs and quarantines, including self-quarantine, in the US, the national discourse was on the citizen’s right freedom of movement and right to choose the course of medication.

No wonder, for the leader of the modern / free world, the number of pandemic deaths, running into hundreds of thousands, was unacceptable, especially in the eyes of less liberal and less modern nations and their peoples. But America does not live for others, and the nation, starting with Donald Trump, who was in power when the hell broke loose, were out to prove the point, under unanticipated global conditions.

Not in Sri Lanka. Here, Covid was not the first of the current crises. Nor was it the last one. Yes, the Easter blasts, as it now turns out, was only heralding a series of crises, of which it was still the worst for its own reasons, but the pandemic did give it a tough time, if it was about the death-roll. But they were not the only ones.

Today, the nation is steeped in debt of every kind – no, not just at the level of the government. Individuals, over the past years, have been forced to borrow left, right and centre, to feed their hungry ones at home. To pay up one debt, they borrow more. Which is what their government too has been reduced to doing, for sometime now.

No, it is not about blaming the incumbent government in institutional terms or the ruling Rajapaksas, personally. The rot set in long ago, with the unthinking liberalisation drive of late President J R Jayawardene, as far back as the late seventies.

Was JRJ pleasing himself or the American masters of the time, just because he wanted a politico-strategic antidote to the increasing Soviet domination in the larger Indian neighbourhood? There are no answers now as the very same JRJ also meekly invited India to send in troops to hold peace – that was not held – between the government forces and the LTTE. He also succeeded in painting it as a part of India’s ‘hegemonic designs’, which he was otherwise fighting.

It is here where history seems to have failed Sri Lanka – one more time… A decade down the line, JRJ’s liberalisation programme, rather its fast and varied unfolding, coincided with the Indo-Sri Lanka Accord and the induction of the IPKF. That was in the late eighties.

The JVP was ready for its ‘second insurgency’ at the time. A militant group that was fighting for the still fashionable socialist ideology, and with arms, got side-tracked. They fought the Sri Lankan State, yes, but not on economic issues that hurt its support-base worse than anytime previously.

Instead, the JVP saw the LTTE-induced Indo-Sri Lanka Accord and IPKF induction as occasions to expand its core-base, after retaining their  socio-economic constituency. The latter had remained mostly in tact after the ‘First JVP insurgency’, as far back as 1971. They forgot their socialist agenda for once and began a new trip on ‘Sinhala-Buddhist nationalist’ agenda. Possible, Stalin and Mao were their inspirations.

The Sri Lankan State eradicated the ‘Second JVP Insurgency’ as it did with the first, and at a heavy cost of Sinhala-Buddhist youth. The Tamils would take their turn, next. The crux of the Second JVP Insurgency is that a strong political/military public opposition to unthinking liberalisation got completely side-tracked, and the rulers became unaccountable to date.

The question now is: What does the ‘Manike Mage Hithe’ moment hold for the nation? Is it that people have made light of their problems, past, present and future, or is it only a passing moment? Does it mean that once this moment passes off, there will be such other moments, where the same generation would begin thinking differently, diagonally and tangentially, all rolled into one – or, many.

Those are the moments, the nation should be worried about — not just the rulers, but the ruling class as a whole should be concerned about. Those are also the moments that the people should pray does not recur, not after the two JVP insurgencies and the long war of LTTE terror, not to forget the more recent, equally consequential ‘Easter blasts’.