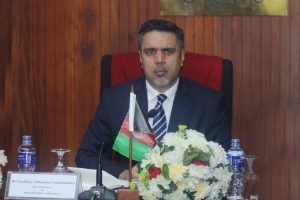 The Afghan Ambassador to Sri Lanka, M. Ashraf Haidari has warned that the situation in Afghanistan could impact Sri Lanka.

Ambassador Haidari noted that maritime security in the Indian Ocean region would most be affected by the unfolding situation in Afghanistan with implications for coastal nations, including Sri Lanka, where drugs produced in Afghanistan and trafficked by regional and transnational organized criminal networks had already affected public health, while financing terrorist activities aimed at undermining governments in the region.

He had expressed these views at a meeting with Major General Milinda Peiris, the Vice Chancellor of General Sir John Kotelawala Defense University (KDU).

At the meeting Ambassador Haidari also discussed the failed Doha Peace Agreement, which excluded the Islamic Republic, and its total lack of implementation has emboldened terrorists across the world.

In this light, he congratulated the General on Sri Lanka’s decisiveness in its early war against terrorism, which the country defeated in 2009.

As South Asia’s oldest democracy, Ambassador Haidari said that Afghanistan had much to learn from Sri Lanka’s war-to-peace-transition, with the continued support of the international community, which he said should help ensure the formation of an inclusive and representative government soon. (Colombo Gazette)