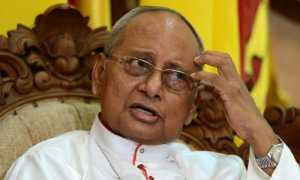 The Archbishop of Colombo, His Eminence Cardinal Malcolm Ranjith has filed a Fundamental Rights (FR) petition in the Supreme Court against the Yugadanavi Liquefied natural gas (LNG) power plant deal.

The petition has been filed together with the Venerable Elle Gunawansa Thero .

US based New Fortress Energy and the Sri Lankan Government had recently signed a controversial LNG deal.

The 310 MW Yugadanavi Power Plant currently has a long-term power purchase agreement to provide electricity to the national grid that extends through 2035. This power plant consists of General Electric turbines and is configured to run on natural gas in combined cycle. (Colombo Gazette)