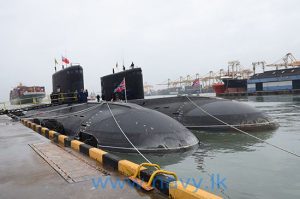 Two Russian submarines are among Russian war ships which arrived at the Colombo Port today.

The crew members of the squadron are expected to engage in a sightseeing tour in Colombo.

The squadron is expected to leave the island on 18th October. (Colombo Gazette)