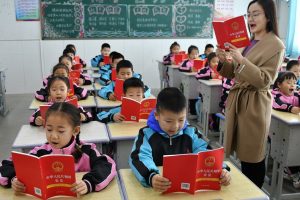 Despite Beijing’s cracking down on private tutoring, Chinese parents are still hiring underground tutors in a bid to obtain better scores for their children’s university entry exams.
At the end of September, the Ministry of Education reiterated its policy banning small-scale private tutoring, which has been disguised under different names.

“We will strengthen the coordination with other authorities and use various means to detect and raid this illicit activity that goes with names like one-on-one teaching, high-end domestic helper service, crowdfunding private tutoring, and live-in teaching,” an official from the ministry’s after-school training supervision department said at a press conference.

The official, whose name was not released in the report, said the government is aware that black market tutoring has appeared since China launched a sweeping crackdown against tutoring institutions in July.

“This will directly affect the implementation of the central authorities’ policy. It will also lower the public’s satisfaction about this reform,” he said. “Therefore our attitude is clear that we will firmly punish those hidden rule-breaching activities.”

However, some families have found ways around the order, with parents continuing to hire private tutors for their children.

Michelle Su is one of them. The Shanghai mother sends her eighth-grade son to two tutors’ homes on weekends to attend English and physics classes. Although this violates the government’s private tutoring crackdown on weekends, Su said she doesn’t care.

Su said she hired the physics teacher after being introduced by another parent, while the middleman for the English teacher is a teacher at a tutoring institution where her son previously studied before the ban.

Both English and physics classes are attended by three students, including Su’s son. Each class, lasting two hours, cost 300 yuan (US$46).

“The one-on-one teaching will be at least 700 yuan (US$108) per class. I can’t afford that,” said Su.
She said she has not checked if these two tutors are licensed, a mandatory requirement for people engaged in the private tutoring industry.

“What I care about is whether they are good at teaching and whether my son’s scores in these subjects has improved or not. That’s all,” said Su.

The crackdown on the private tutoring sector is part of China’s initiative of reducing primary and middle school students’ homework burden from extracurricular academic training, known in short as the “two reducing” policy.

“The ‘two reducing’ policy is a long-term, complicated and systematic project. We must implement it in a wide range and in a strict manner. We must be persistent in rolling it out,” the ministry official said.

Some teachers have been deterred by the reform.

A woman teaching English at an after-school institution in Shanghai said she will never consider the underground tutoring opportunities in future because of the current strict order.

“It will be too risky. The teacher’s licence of mine will be revoked. I definitely will not do that,” said the woman who wished to be identified only by her surname Wang.

She said in the past several parents had asked her to coach their children at home, but didn’t agree with the high tutoring fees.

Another Shanghai mother, surnamed Fang, said the mathematics teacher she hired in the past year halted the tutorial class and refunded the fees in August.

But one teacher who coaches Fang’s son and another boy in English still teaches online every Sunday.
“This English teacher has taught us for two years. He knows us well and we have promised that we will not report him to the authorities,” Fang told the Post.

“He has become more cautious than before. For example, he has changed to teaching on another online chatting platform recently,” she added.

Some local governments have encouraged residents to report illegal tutoring, with whistle-blowers offered rewards of hundreds of yuan.

Earlier this month, the education authority in Anhui punished a middle schoolteacher for tutoring students in his villa during the summer holiday. His bonuses will also be deducted, according to the authority.

Li Tao, a professor from the China Institute of Rural Education Development at Northeast Normal University in Changchun, said the demand for after school tutoring would continue as long as there was fierce competition for high academic diplomas.

“Many of the parents of the current primary and middle school students have benefited from high degrees. They have financial abilities [to hire tutors] and know that a good education can prevent their children from falling into a lower hierarchy in the society,” Li told the Post.

But the private tutoring practice is against the country’s strategy which is to train talent with “comprehensive qualifications”, he said.

“To solve parents’ anxiety over their offspring’s education, the authorities should let them understand the correct education values and further reform the education system,” said Li. -(South China Morning Post)