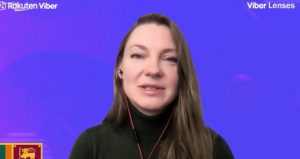 Viber today assured Sri Lanka on data security and privacy, even as concerns continue to be raised over information security on social media.

Chief Growth Officer at Rakuten Viber, Anna Znamenskaya told journalists today that information shared on Viber is encrypted and cannot be accessed by a third party.

Responding to a question raised by Colombo Gazette during an online launch event, Znamenskaya assured that even officials at Viber cannot access private messages.

She said that the only way a third party can access information on Viber is if the phone or computer is compromised.

Znamenskaya also noted that there has been a rapid rise in the number of Viber users in Sri Lanka and around the world during the pandemic.

She was speaking at the launch of Viber Lens in Sri Lanka. (Colombo Gazette)