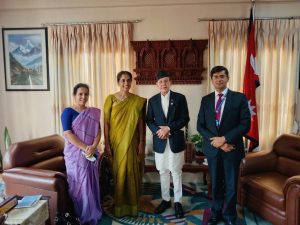 Nepal and Sri Lanka have discussed cooperation in the regional and international fora.

In his congratulatory message, Minister Peiris recalled the centuries old connections between the two countries with deep rooted cultural and religious ties.

Minister Khadka conveyed his sincere appreciation to Prof. Peiris and underlined the longstanding friendship between the two countries. He also thanked Sri Lanka for its assistance in the reconstruction of two temples damaged in the 2015 earthquake.

Bilateral cooperation within regional and international fora and business collaborations to promote trade and investment were also discussed. Ambassador Arunatilaka recalled the constructive engagement between the private sectors of Sri Lanka and Nepal in recent months, particularly in the areas of construction, tourism, hydropower and gem and jewelry as being noteworthy developments to enhance economic relations.

Minister Khadka appreciated the efforts taken to restore direct air connectivity between Colombo and Kathmandu and noted that the direct flight operated by SriLankan Airlines would help to promote tourism and trade. He underlined that historical Buddhist ties between the two countries provide incentive for greater people to people exchanges and increased tourism, while Lumbini was of particular significance in this regard.