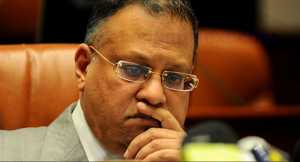 Mahendran is believed to be in Singapore and an attempt to have him extradited to face the trial in Sri Lanka has so far proved futile.

Justice Minister Ali Sabry informed Parliament last December that Sri Lanka and Singapore were engaged in discussions on the extradition of Mahendran.

He further said the AG of Singapore had sought certain clarifications from the Attorney General of Sri Lanka on the extradition request. (Colombo Gazette)