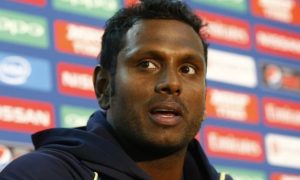 The Sri Lanka Cricket Board has decided to allow former Captain Angelo Mathews to resume training and be in line for selection for future tours.

Accordingly, Mathews has been allowed to join the squads training at the High-Performance Center, focusing on future international tours.

Mathews was relieved from national duties during the month of July 2021, following a request made owing to personal reasons.

It was reported that Mathews had made himself unavailable for selection earlier this year, saying he was disillusioned by the treatment he and other seniors had received during a months-long contract standoff.

ESPN had reported that under the central contracts offered by the board, Mathews was set to take a pay cut in the range of USD 50,000 (LKR 99,50,000 approx).

During this period Mathews, along with fellow seniors Dimuth Karunaratne and Dinesh Chandimal, had also been dropped from the limited-overs sides as Sri Lanka focused on a youthful overhaul of their white-ball squads. (Colombo Gazette)