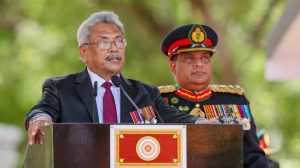 President Gotabaya Rajapaksa has not admitted that he had failed to deliver to the public, the Government said today.

Media Minister Dullas Alahapperuma told reporters today that the President had only stated that both he and his Cabinet must accept that they could not meet the full expectations of the public.

“It is not fair to give any other interpretation to that,” the Cabinet spokesman said.

Alahapperuma said that if there are any shortcomings then the Government will accept it.

“The people may have a sense of displeasure towards me and the Government for not delivering as they expected. I accept that. Not only me but all Ministers and MPs should accept it. However, I promise on behalf of the people that we will move the country forward with new vigour by controlling the COVID pandemic and by opening up the country under new normalcy. Everyone needs to work together for this purpose,” the President’s Office quoted the President as saying at the 72nd Army Day celebrations.

Alahapperuma asserted that accepting shortcomings should not be seen as the end of the road for the Government. (Colombo Gazette)