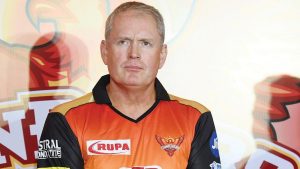 Former Australia all-rounder Tom Moody is expected to apply for the high profile job of Indian cricket team’s next head coach for a fourth time, following the conclusion of the upcoming T20 World Cup, according to a media report.

“It’s understood the former World Cup-winner and well-travelled coach is eyeing the Indian coaching job, which is set to be vacated by [Ravi] Shastri following the impending T20 World Cup,” Foxsports.com.au reported.

Moody, 56, who currently serves as IPL side Sunrisers Hyderabad and Sri Lanka’s director of cricket, has expressed his desire to coach the Indian side before, applying thrice for the top job in the past, including in 2017 and 2019, but has never been considered. (Courtesy PTI)