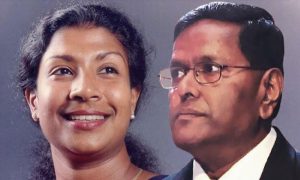 As is to be expected, the mention of a ‘Rajapaksa couple’, though on the female side of the ruling family, in the ‘Pandora Papers’, has expectedly fanned some excitement in political circles. Naturally, Sajith Premadasa, leader of the mainline SJB Opposition, has called the Bribery Commission probe, ordered by President Gotabaya Rajapaksa as a ‘mere eyewash’.

Thirukumar Nadesan, husband of Nirupama Rajapaksa, ex-deputy minister in the Mahinda Rajapaksa regime, has pleased innocence in public. He has also recorded his statement before the Bribery Commission. The next step will be known only when the probe panel reports back to the President, after relevant investigations, based on media reports and Nadesan’s statement. In between comes the add-on report that he had wanted to acquire Cyprus citizenship through the payment gateway, which is available in some countries, neighbouring Maldives being among the more recent ones to open the facility.

The Pandora Papers are a product of sustained work undertaken by the International Consortium of Investigative Journalists (ICIJ), with 91 media outlets in 117 countries participating. The ICIJ was earlier in the news in 2016, when it came out with the Panama Papers, followed by the Paradise Papers the next year.

No Sri Lankan names were believed to have been linked to either, though after the latter, then Finance Minister Ravi Karunanayake declared that they would seek to find out if there was any such link. That his own name got linked to the ‘Central Bank bonds scam’ may have taken some seriousness out of his promise, but then nothing seemed to have come out of the same. It is not known if any such probe was even undertaken.

A quick look at the published names in the Pandora Papers give the impression that all illegal money emanates mostly from Third World nations, and some of it may be parked in the First or Second World. At least where politicians or political families are named, clearly, domestic rivals would target them, naturally. Whether any international follow-up would come up is unclear as yet. At least, nothing dramatic has come out of the previous two expose in that sense of the term.

By implication, that is if you care to comb through the list when you have nothing to do in lockdown-like conditions attending on the COVID-19 pandemic, you will have to conclude that the political class in most of the West are gems that do not corrode or erode and that God Almighty has sent all bad guys only to the Third World. Rather, those countries that have harboured such unscrupulous elements had been condemned to remain within the ‘developing nation’ bracket, with little or no hope of their moving on to the First World list.

All of it does not mean that there is no corruption in Third World nations. If anything, the economy of many Third World nations may have dwindled to such an extent, owing to their political and bureaucratic masters and also the private sector parking their nation’s wealth in ‘tax havens’, mostly identified with westerns nations earlier, but not always so any more.

This is not without explanation. The moneys that are thus siphoned off run to billion, whether in the nation’s currency or in dollar terms. If accounted for and taxes are paid for, then it boosts the government’s revenue, the economy and the GDP. Even if kept as black money inside the country and spent on local luxuries from multiple mansions to a fleet of cars, shopping malls, gold, silver and diamond, not to leave out massive family weddings, then the money will be in circulation, however ill-gotten, and a long list of local trades and craftsmen would have got a share in it.

In such a case, in the hands of most of them, again, it would all be black money still, and a parallel economy would have thrived is another thing. But that money would still be available to the nation’s economy. It is not the case with off-shore parking, for which the depositor even ends up paying a fee.

Under the circumstances, the Government could well consider ways and means to bring back all the ill-gotten wealth back into the country and facilitate their legitimisation and circulation. In these times of forex crisis, it may be a way for the government to give a new boost to economy. Planned with perspective, it can be used to boost the forex situation, too.

It boils down to the government repeating on the black money front, what it did in terms of busting hoarding and black-marketing of sugar and rice, among other essential commodities. It can be done through some kind of a voluntary disclosure scheme accompanied by tax-breaks and threat of severe penalty in case of non-compliance.

Yes, it is a difficult political decision for the government to take, especially given the ruling SLPP’s inherited left identity and ideology. But harsh situations demand harsh and innovative responses. And the government accepts that the food and forex crises are harsh on the common man, rich man and the economy alike!