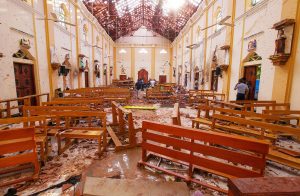 The All Ceylon Jamiyyathul Ulama (ACJU) is alarmed over media reports warning that Sri Lanka may face another terrorist attack similar to the Easter Sunday bombings of 21st April, 2019.

In a media statement, the ACJU encouraged the Muslim community to pray and make Du’a to Almighty Allah (SWT) to protect Sri Lanka and all its people from all forms of tragedies and disasters.

It also appealed to the Muslim community to be very cautious and vigilant as the claims of an attack have not been verified.

“We appeal to the community to be wary of the ISIS and similar terrorist organizations which are misleadingly and falsely representing themselves as protectors of Islam while they are widely perceived as being orchestrated by elements hostile to Islam and all religions,” ACJU said.

ACJU noted that Islamic Scholars around the world have unanimously stated that these organizations are anti-Islamic terrorist groups, whose handlers are yet to be fully investigated.

The ACJU and all Muslim Civil society organizations had collectively issued a Declaration on 2015.07.23, declaring that such organizations are completely against the teachings of Islam.

“We are deeply saddened by the fact that the innocent civilian lives were lost and many suffered injuries in the brutal attacks carried out by terrorists on the Easter Sunday of 21st April 2019. We need to emphasize that our community has made innumerable contributions and sacrifices in the national interest of our country. Our forefathers have contributed immensely to preserve the sovereignty and security of this country throughout history. Similarly, they have been in the forefront of developing and strengthening beneficial foreign relations with our country,” ACJU said.

ACJU said that vested interests are continuing to instigate distrust and hatred on grossly false basis against Muslims, following the cowardly and brutal terrorist attacks carried out by a few misguided elements with Muslim names, while overlooking the invaluable contribution of the community towards this nation. (Colombo Gazette)