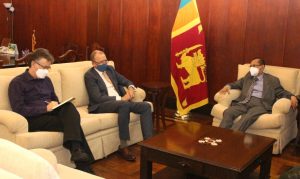 Sri Lanka today reiterated its concerns on a Bill passed by the Ontario Legislative Assembly on Sri Lanka, which has now been challenged in the Ontario Superior Court.

“A number of areas of ongoing bilateral cooperation were discussed. The Minister also briefed the High Commissioner on Sri Lanka’s recent multilateral engagements in Geneva and New York,” the Foreign Ministry said.

The Minister updated the High Commissioner on progress related to Sri Lanka’s vaccination programme and the gradual opening up of the country. The Minister appreciated Canada’s contribution to Sri Lanka’s process of recovery from the pandemic. Sri Lanka continues to seek vaccine availability from all available sources.

The High Commissioner briefed the Minister on post- Covid recovery in Canada and economic collaboration between Sri Lanka and Canada, as well as other issues of mutual interest.

The Minister reiterated Sri Lanka’s strong concern regarding the Private Members Public Bill passed earlier this year in the Ontario Legislative Assembly including  Sri Lanka’s  objection to the unacceptable association of genocide in relation to the past conflict in Sri Lanka. The Minister noted that this Act is being challenged in the Ontario Superior Court. As highlighted in his address to the UN Human Rights Council, Sri Lanka is continuing its efforts to achieve reconciliation among the communities following decades of terrorist conflict. The Minister also recalled that the LTTE is a proscribed terrorist organization in Canada.

The High Commissioner stated that this issue, which was a decision by the Ontario Legislative Assembly, is in a judicial process relating to a Constitutional Question. He agreed to keep the Minister informed of developments.